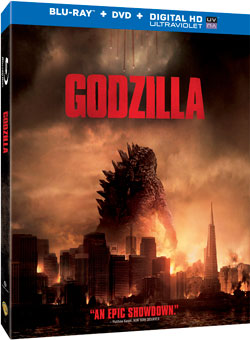 Warner Home Entertainment has just unveiled details about the upcoming release of their blockbuster Godzilla, hitting DVD and Blu-Ray Disc with full force in September.

In this gritty, realistic sci-fi action epic, Godzilla returns to its roots as one of the world’s most recognized monsters. Directed by Gareth Edwards and featuring an all-star international cast, this spectacular adventure pits Godzilla against malevolent creatures that, bolstered by humanity’s scientific arrogance, threaten our very existence.

The release will arrive in a variety of packages, such as a Blu-Ray 3D Combo version that also contains the Blu-Ray and DVD versions, a Blu-Ray Combo Pack with the DVD as an accompaniment, and as a 2-disc DVD version.

All versions will include the Multi-Part Documentary ”MONARCH: Declassified”, which will allow you to discover explosive new evidence not contained in the film. the information unravels the massive cover-up to keep Godzilla’s existence a secret. The documentary will consist of the parts ”Operation: Lucky Dragon,” “MONARCH: The M.U.T.O. File” and ”The Godzilla Revelation”.

There will also be the Multi-Part Documentary ”The Legendary Godzilla” that will take you behind the scenes with filmmakers and cast for an even deeper look at the larger than life monsters in the film. This documentary will cover ”Godzilla: Force of Nature,” “A Whole New Level Of Destruction,” “Into The Void: The H.A.L.O. Jump” and ”Ancient Enemy: The M.U.T.O.s”.

In addition, all version will also include a Digital HD version of the film.

“Godzilla” will rise on home video on September 16 and you can own the Limited Edition MetalPak Blu-ray 3D Combo Pack for $44.95 and the Blu-ray Combo Pack for $35.99. The DVD version will carry a $28.98 sticker price! Preorder your copy on Amazon now for a major discount!