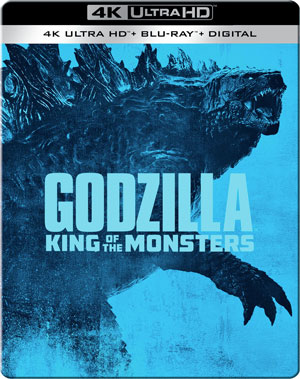 Warner Brothers Home Entertainment has just unveiled details about the upcoming release of the latest kaiju smash hit, Godzilla: King of the Monsters, bringing the behemoth to 4K UHD, Blu-Ray Disc and DVD in August.

The new story follows the heroic efforts of the crypto-zoological agency Monarch as its members face off against a battery of god-sized monsters, including the mighty Godzilla, who collides with Mothra, Rodan and his ultimate nemesis, the three-headed Ghidorah. When these ancient super-species—thought to be mere myths—rise again, they all vie for supremacy, leaving humanity’s very existence hanging in the balance.

The 4K UHD version of “Godzilla: King of the Monsters” will feature a Dolby Atmos audio track and Dolby Vision HDR, as well as the new HDR10+ encoding, a new HDR technology that optimizes brightness levels and contrast for each scene.

Filled to the brim with bonus features, the release will offer up a Commentary Track with director Michael Dougherty, as well as a selection of Deleted Scenes. The real meat of the release, however, will be the incredible variety of Featurettes that cover aspects such as Godzilla: Nature’s Fearsome Guardian, Mothra: Queen of the Monsters, King Ghidorah: The Living Extinction Machine, Rodan: Airborne God of Fire, Godzilla 2.0, Making Mothra, Creating Ghidorah and Reimagining Rodan, just as a start.

In addition there will be Featurettes covering the locations of the movie, such as The Yunnan Temple, Castle Bravo, The Antarctic Base, The Isla de Mara Volcano and The Undersea Lair.

As if that weren’t enough, the release will also contain the Featurettes Millie Bobby Brown: Force of Nature, Monster Tech: Monarch Joins the Fight, Monsters Are Real and Welcome to the Monsterverse.