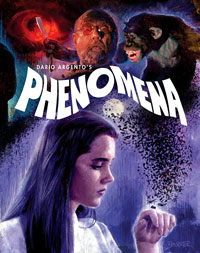 Anyone remotely familiar with Dario Argento’s filmography will likely agree that his body of work is widely diverse, to say the least, often tip-toeing the line that separates thrillers from horror, and blurring it with ease. And like any maestro growing in popularity, inevitably a production will arrive that presents a conundrum for the hungering audience, where it appears as though the artist’s ambitions outshadowed any sense of rationale and the resultant film emerges as a bizarre spectacle that inevitably divides fans and critics. In the case of our “Italian Hitchcock,” Phenomena is that film.

Argento himself has stated in interviews over the years that he looks back at the production very fondly, even though it was riddled with uncertainty at the time—and for good reason: On the whole, the movie took many risks with an abnormally large amount of oddly specific measures Dario Argento had to take in order to get the product he wanted. It is a twisted hybridization of elements that grafts whimsy Grimm-esque aesthetics onto a cold and bitter real world. Argento was very particular with how he wanted his perversion of the fairytale genre to be executed and it shows, with a near-two hour-long movie that seemingly moved when it wanted to and began to show thematic cracks upon any further alteration.

Phenomena is the tale of a young boarding school girl accidentally stumbling across a murder victim on the academy grounds. This brings her to the attention of the mysterious killer prowling the Swiss countryside. From that point onwards, the movie swiftly begins to weave a Stephen King-esque narrative that—keeping things vague—spirals into an absolute fever dream that is flooded by constant doses of gorgeous visuals and a wild hodgepodge of 80s music.

Synapse Films is offering up Phenomena on this 4K UHD release in a presentation that is easily the best, and most definitive release of the movie to date. It even goes so far as to include all three of the film’s theatrical cuts.

Originating from the 4K restoration of the movie from its original camera negatives that Arrow Films produced for the UK release in 2017, the picture is as close to pristine as you likely can get—at least for the time being—with lots of fine-grained detail. Thanks to the proper 4K UHD encoding, these details can now be properly appreciated at last. I will say the shadows appear to be a smidgen darker this time around, but that’s mostly negligible, especially considering that these details used to be no more than a formless haze of grain in previous Blu-ray versions.

There are a few odd shots where the export cuts are still sourced from AGFA’s theatrical Creepers Fuji print, so the image will occasionally turn extremely soft due to the inherent generation loss. It is a bit distracting, though admittedly, the clean-up work was well done. The slow-motion defenestration shot from the film’s opening is also still extremely coarse-grained, but it’s a limitation resulting from the inherent nature of the shot. Thankfully though, this restoration helps give it justice as the best it has ever looked.

The real prize with this restoration, however, is the Dolby Vision color grade used for this go-around. Although I didn’t personally mind the warm, earthy color grade the movie was presented in for the Arrow Blu-ray back in 2017, it was clearly an unfortunate case of heavy-handed revisionism that frequently ended up neutralizing a lot of the strong, blue-gelled lighting throughout the movie to a pale gray. Most likely, thanks to Synapse’s cooperation and supervision on this release, this new 4K UHD transfer has gone the extra mile and regraded the entire restoration shot-for-shot to recreate the timing as seen on the earlier Synapse Blu-ray release. It produces clean whites and a notable blue-push in many of the night-time sequences that are enhanced thanks to the HDR non-gamut compressed format that has been used. As a result, blues that appeared pastel-toned before are now extremely rich.

Although I cannot say for sure that this is how the movie looks on an original 35mm print (as I highly suspect the original photochemical timing pushed for an even bluer look), I will say that this is most likely the closest the movie will get to it. The only room for improvement at this point appears to be a transfer that uses a scanned answer print—approved by Dario Argento—as a source of reference to directly mimic the color grading, something that is not very likely to ever happen.

In the audio department, things are also rather interesting. Because this release is an Arrow/Synapse co-production, the disc provides essentially all of the audio tracks that were previously exclusive to their respective Blu-ray counterparts. From the Arrow camp, we have the original mixes and hybrid remixes—English and Italian in stereo and surround—restored from the original Dolby 4-channel elements along with a Troy Howarth commentary. From the Synapse camp, we have an odd alternate stereo track for the International cut that sports some radically different mixing and an occasional unique audio cue, a mono-stereo hybrid mix of the Creepers cut (as the original 3-track DME magnetic mix contains the music in stereo) along with a commentary by Derek Botelho and David Del Valle.

Overall, this is really a nice grab-bag of tracks to suit anyone’s tastes and desires. It was a missed opportunity for Arrow, in my opinion, to not provide the original Dolby 4-track elements in a 4.0 track as-is and not in a 5.1 surround remix. I say this because the remix suffers from some rather weak mixing resulting in a noticeably flanged and echoey track with audible phase cancellations—but that may just be me and my gimmicky taste.

I also did find it a little disappointing that a previously reinstated English-dubbed line from the Synapse Blu-ray version didn’t carry over into this one, swapping back to Italian in its stead. In all fairness, the mixing was atrocious due to the fact that the element source for it originated from an international trailer, but it is a bummer knowing that some of the on-set recordings are still lost. Perhaps one day it’ll be a Vinegar Syndrome Trauma situation where workprint elements are found to patch in and complete the presentation, but who knows if and where such elements might even exist.

In terms of the extras, apart from the commentary tracks I mentioned, we essentially have all of the extras from the 2017 Arrow Blu-ray carrying over to this release. It includes “The Three Sarcophagi”, a nice overview of the different cuts of Phenomena by Michael Mackenzie, the retrospective documentary “Of Flies and Maggots” with interview footage of Dario Argento and other collaborators, original soundtrack music videos, and a digitized Japanese press book.

There are a few minor carry-overs from the Synapse Blu-ray, namely US advertisements of the Creepers cut, but I will say that the contrast for the theatrical trailer is so extreme that there’s practically nothing to be seen. Seems a bit funny that such a garbled trailer would get included when none of the more substantial available extras made it. Featurettes such as “Dario Argento’s ‘World Of Horror’,” come to mind, but that’s probably just nitpicking at this point.

The release offers a nice packaging, with a number of neat gimmick items to boot, such as a reversible fold-out poster of the US and Japanese artwork, reproductions of the original Italian lobby cards, and a little booklet with relevant, analytical essays and restoration details. It’s all rather nice, though admittedly, I do wish they had still included the remastered soundtrack CD that Arrow and Synapse touted previously. It’s not a point of contention, though, because I’m honestly more than happy with what Synapse provides here.

Interestingly enough, I’m not really a fan of the artwork for this Synapse release—or rather the front side of it. I find the backside of the packaging that is normally covered up way nicer than the front. Thankfully, I can easily just flip my box over and call it a day.
I cannot praise this release highly enough. It deserves an A+++ for effort, quality, content, and presentation. All I can do is to implore any fan of the movie to pick up a copy, or the respective Arrow UHD if you’re overseas, as it’s easily the best version of the movie available. It blows all prior releases out of the water by a mile and definitely makes it worth the price of a double-dip, even if you already own a previous copy of the film.

For those of you who may never have heard or seen Phenomena before, I also highly recommend picking up a copy. It is an absolutely wild ride that must be witnessed to be believed and Synapse allows you to do so in its full glory. I don’t necessarily recommend the Creepers cut for a first-time viewing, but I will say that it is a suitably short version of the film for impatient watchers that gets right to the good stuff in under 90 minutes. Otherwise, if you’re patient enough to sit through the movie’s more ambled pace, I recommend sticking to either the International or Italian cuts. My personal preference is going full Italian because that is ultimately the real experience that allows you to soak in Argento’s vision.

Now, if the opening murder sequence doesn’t have you hooked, then hopefully the star-studded cast will—with Jennifer Connelly, Donald Pleasance, and Daria Nicolodi to name but a couple. And if you’re still unsure about checking it out, ask yourself this: How many murder mysteries do you know that involve the warm Alpine Föhn, split-personality sleepwalking, insect telepathy, Iron Maiden, and a vengeful chimpanzee nurse? I bet I got you interested now…