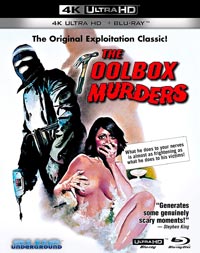 It was the break-out success of Tobe Hooper’s 1974 low-budget picture The Texas Chainsaw Massacre that helped form the horror genre as we know it today. That may seem like a slightly pompous blanket statement to take at face value, but I do want to highlight the fact that it has helped shape and influence a significant number of horror flicks in the many years that followed. I could get into a whole tangent on how exactly it has impacted the genre (and how these borrowed elements carried over from film to film over time, gradually formulating the genre’s staples as we know them today), but the relevant bit I want to highlight is that there was a noticeable precedent in movies that took heavy inspiration from the film and its thematics.

The mid-70s Americana-horror wave produced quite a mixed bag of titles to choose from. There are classics like Wes Craven’s The Hills Have Eyes, and also some… not-so-remembered “classics”, like today’s feature: Dennis Donnelly’s The Toolbox Murders.

The movie follows a string of violent murders committed by a mysterious, misogynistic, masked man. After two bloody nights though, the killings appear to have stopped, leaving police and local citizens baffled as to why. But then police receive the report of a missing, young girl whose brother suspects the perpetrator at large to be the culprit. With a lack of cooperation from the police, he decides to try and solve the mystery on his own and tresspasses on the crime scenes. He finds only one clue: Each of the victims has been done in with various hardware tools.

Admittedly, finding much praise for this movie is a bit of a challenge simply because it is an undercooked low-budget grindhouse affair first and foremost. The majority of the movie’s runtime amounts to essentially a nothing-burger. For starters, a lot of the character performances are pretty weak and amateurish. Only a handful of instances stand out where the quality makes a sudden, hard U-turn and is somehow exceptionally decent. Most of these instances though specifically involve characters being incredibly traumatized. The plot itself is pretty barren with awful pacing that seems to go nowhere for most of the runtime, further exasperating the weak acting. (It typically teetered from wooden to comedically over-the-top and back).

Stylistically the movie is very rough around the edges and only seems to show any flair during the opening murders. The soundtrack goes back and forth randomly from ill-fitting country music to decent but cacophonous duets of bass synth and piano melodies. It is actually kind of amazing how this movie manages to trample back and forth between competence and baffling inadequacy so consistently that it makes watching it even more of a painful experience.

Okay, painful is a bit of an exaggeration, but the fact is that this movie constantly teases the viewer is not very appreciable. It is like a switch that’s constantly toggled. One moment it is actually really cool or interesting. The next it is just absolutely dull and paltry. It makes you wonder behind-the-scenes events would have led to the production being as confused as it is. I understand that this was literally conceived by producer Tony Didio as a spin on The Texas Chainsaw Massacre. The movie’s latter half makes that abundantly clear. But as you may have glanced from the synopsis, it doesn’t even remotely open up like the psychological horror of Tobe Hooper’s creation. Instead, it opens as a straight slasher flick before spiraling into a procedural that goes nowhere before finally reaching something thematically similar in its last act, by which time most people have probably tuned out.

It’s just a baffling watch as a whole quite frankly. When I initially sat down to screen this movie, I wasn’t aware of any of this. All I knew was that it was being released in UHD by Blue Underground and that it was touted as a banned UK “Video Nasty,” considered an exploitation splatter classic of sorts heralded by even Stephen King. Only, by the time the end credits rolled, I fully understood why critics almost universally panned it.

I am genuinely confused as to why it has built such a reputation. There’s hardly any explicit content in the movie. Practically all of the exploitation material is either left off-screen, obscured by something in the environment, or is onscreen for a fraction of a second—even in its touted “uncut” form. And whilst I will admit, it had its moments from time to time, the film always came down to a scene’s implications than anything actually shown. Now, whilst I am a proponent of implied horror (and to the movie’s credit, a few bits that relied on this were really effective and unsettling), the problem is that anyone who expects otherwise from this movie will be left sorely disappointed. And again, how this movie came to be so infamous is beyond me, especially when contrasted directly with its competition from the same era.

I don’t hate the movie as a whole, though. As I mentioned earlier, every now and then it has some decent moments that I’d argue make it worth watching if the opportunity arises. Whether that is worth the purchase of a full copy I’ll leave to your discretion. That said, the release that Blue Underground put together here is pretty nice as a whole, providing you with the movie in a 4K UHD version and as a Blu-Ray disc.

The master itself is solid enough, with a new 4K restoration from the original camera negatives with a Dolby Vision HDR grade. The scan is looking good and offers up a clean and detailed image. It is very grainy, however, given the low-budget nature of the production, and has not been digitally scrubbed to remove the grain, which I consider a bonus. The color grading is a bit questionable in some areas—Dolby Vision feels rather underwhelming at times—and shot-to-shot color consistency appears to be lacking at times. On the whole, the movie feels a lot darker than it probably should, and every now and then scenes are blanketed in an unusual cornflower tone. I feel hard-pressed to say that the tinge is theatrically accurate, especially considering that this did not appear on the older Blue Underground versions. It was also not present in the 88 Films version, which was restored from positive—albeit faded—film elements that inherently would have been photochemically timed. Be that as it may, though, perhaps this is the correct intended look and it was simply color graded out in past releases.

The audio department offers a small variety to choose from, namely the original English mono track, a 5.1 surround remix, and a Dolby Atmos remix as well. Normally, I am a proponent of the original movie tracks when presented. In this case, however, I will admit that either of the remixes available here is well-designed and definitely worth checking out. They give the score a lot more depth and clarity, which is great given the number of times the editor decided to overlay country music—seriously, make it a drinking game!

The release contains the usual grabbag of original trailers and spots, as well as a number of brand new interviews and commentaries. Frankly, I’d imagine those would make for a more interesting viewing than the movie itself as they help provide you with insight into the production itself. Your mileage may vary, of course, depending on what kind of disc collector you are and whether you would consider this a strong selling point.

The Toolbox Murders is not the worst thing I’ve ever seen by any stretch, but I have trouble recommending this to just about anybody. It is an acquired taste for an acquired audience. If you like schlocky grindhouse fare or want to delve into the weird realm of proto-slashers, go ahead and grab a copy. Otherwise, I’d just say stick to finding some cheaper alternative, or perhaps consider looking into the remake which ironically was directed by Tobe Hooper himself—the imitator being picked up by the master.