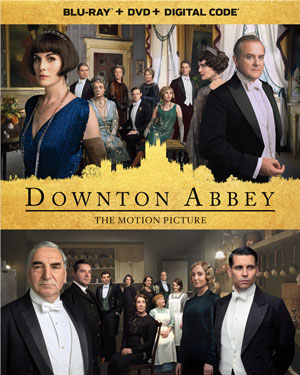 While still running encore engagements in theaters across the country, Universal Home Entertainment has just added the feature film version of Downton Abbey to its roster, planning to bring the movie to Blu-Ray Disc and DVD in December.

The film chronicles the Crawley family one year after the conclusion of the series, as they prepare for the most important moment of their lives: an impending visit from the Royal Family. Join the glitz, glamour and spectacle as the special visit unleashes scandal, romance and intrigue on the fan-favorite family and its staff members.

Arriving just in time for the holiday season with a broad variety of bonus features, the film is celebrated as a true love letter to the television show and brings back together the original cast in a grand, cinematic experience.

The release will feature a Commentary Track by Director Michael Engler, as well as a host of Deleted Scenes and two separate Roundtable Interviews covering the Upstairs and the Downstairs cast.

The Featurette The Royal Visit takes a look at how the royal visit proved to be an ambitious event both on and behind the camera, while True to the Twenties celebrates the sheer grandeur of the aristocracy in the early 20th century.

Welcome to Downton Abbey offers up a behind-the-scenes look at the grandeur of Highclere Castle and how it serves as a cornerstone in the Downton Abbey franchise, while The Brilliance of Julian Fellowes examines how Writer Julian Fellowes has created a story and beloved characters that resonate with people across the world. It also celebrates Julian’s brilliant creativity and reveals his approach to bringing Downton Abbey to the big screen.

To round out the release—or perhaps to start you up beforehand—the release will also include a Downton Abbey Series Recap, allowing you to catch up with the story so far.

Downton Abbey will be in stores on December 17 for $24.99 on Blu-Ray Disc and $19.99 on DVD. In addition, Universal Home Entertainment will release a Deluxe Limited Edition for only $34.99 featuring the Blu-ray Disc, DVD, and Digital Code, presented in exclusive packaging along with a collectible photo book and recipe cards. The perfect holiday gift—but grab your copy now because it is available only while supplies last!