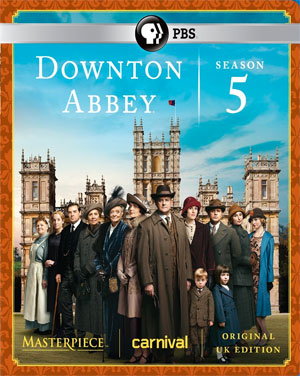 “Downton Abbey” returns for an epic fifth season of intimately interlaced stories centered on an English country estate – a deliciously entertaining formula that has made it the highest-rated drama in PBS history, as PBS Distribution has just announced plans to release Downton Abbey: Season 5 on Blu-Ray Disc and DVD in January already, a whole month before the show’s finale airs on Masterpiece.

Viewers can expect to follow plot threads left dangling from last season, including Lady Mary’s courtship contest, Lady Edith’s trials as a secret single mom, Thomas’ scheming against Bates, Robert’s battles against modernity, Tom’s quest to be true to his ideals, Violet’s one-line zingers, and much, much more.

One of the recurring themes of “Downton Abbey” is change, from the wrenching consequences of the Titanic disaster in Season 1 to a notorious automobile accident at the end of Season 3 – plus World War I, women’s rights, and the new morals, inventions, and fashions of the 1920s.

Which is where Season 5 kicks off. It’s 1924. The United Kingdom has its first Labor Party prime minister. The radio is the latest miracle of the age. And Downton’s traditional ways are besieged on all fronts, as evidenced by this exchange between the head housekeeper, Mrs. Hughes, and the butler, Mr. Carson:
“We’re catching up, Mr. Carson. Whether you like it or not, Downton is catching up with the times we live in,” says the forward-thinking Mrs. Hughes.
“That’s exactly what I’m afraid of!” the butler retorts.

Arriving as 3-disc sets on Blu-Ray Disc and DVD, “Downton Abbey: Season 5” features the original U.K. edition of the beloved TV show, as well as more than 40 minutes of bonus video.