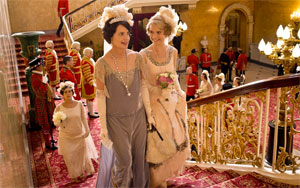 Still one of the highest rated shows on television, PBS Home Entertainment has just released “Downton Abbey: Season 5” as part of its Masterpiece series. Since there is no way to escape the quirky charme of the show, and since I felt entirely deprived of Maggie Smith’s subversively dark humor, I jumped right at the occasion and gave this Bly-Ray set a look-over.

As Downton Abbey returns for its fifth season, times are changing and even the people at the Grantham estate can no longer ignore these changes. As each of the members, upstairs and downstairs, tries to come to gripes with these modern times, once again drama unfolds on all ends. At the center of this season is Edith’s struggle to get recognition, but also how to deal with her dilemma of being an unmarried mother—unbeknownst to all at Downton. Mary, meanwhile, is looking for new suitors, determined to filter through them to find Mr. Right, while Tom makes the acquaintance of a rebellious school teacher who makes quite an entrance at the estate, shaking things up and rattling the Granthams with her radical political ideas. 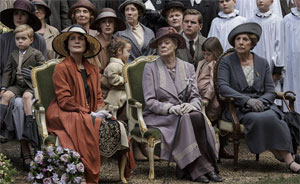 At the same time, the police has begun looking into the death of Mr. Green as is questioning members of the Downton staff, slowly honing in on a suspect who, according to eye-witnesses, pushed Mr. Green in front of a car, thusly killing him. But not all is bad, in order to go with the times, many staff members savor the prospect of change and even begin to invest in their future.

There is a reason, of course, why “Downton Abbey” has been the most watched television show and why it has been showered with nominations and awards—it is simply a deadly combination with a marvelous cast. The plotting in season five is once again exquisite, never lingering too much, always dishing out yet another dilemma or dramatic turn of events. Entirely comfortable in their parts by now, the cast makes the most of the characters, bringing out little nuances and details. I was very happy to see that Maggie Smith’s character Violet Grantham played a much bigger role this time around and got the backstory she deserved—and what a story it is! 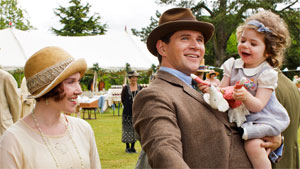 It must be very hard to properly balance a show with such a number of colorful characters, but once again everyone is getting their share of screen and story time. Upstairs we enjoy Michelle Dockery’s cold sarcasm, Edith’s eternal struggle for acceptance, Rose’s aspirations for a better world and Tom’s trials to find his own identity. Downstairs, Daisy wants more from life, while Thomas swings from scheming to temporarily pennant in a heartbeat. The list is endless and it is always an incredible pleasure to see the makers of ”Downton Abbey” deliver the goods in spades.

PBS Home Entertainment is once again serving up a marvelous presentation of the show, a presentation that is virtually flawless. With a transfer that is highly detailed and refined, the show looks like a million bucks with its incredible production values, and the Blu-Ray Disc brings out every little detail. From the costumes to the atmospheric lighting and backdrops, everything in this show is designed with a sense of style and class that is absolutely gorgeous, making every episode a feast for the eyes. Black levels are absolutely solid and the transfer’s color reproduction is rich and natural, without any artifacts or banding. 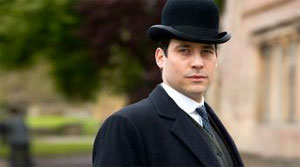 The audio on the release is presented as a stereo mix. It is nicely balanced and works wonderfully to tie it all together. Not overly aggressive, due to the dialogue-driven nature of the show, the track may not impress at first, but its even leveling and mix definitely adds to the overall experience, making sure dialogue is always perfectly balanced and understandable.

As bonus, you will find over 40 minutes worth of additional promo and behind-the-scenes featurettes on the release, allowing you to dig a little deeper into the machinations of the show, its characters and its world. 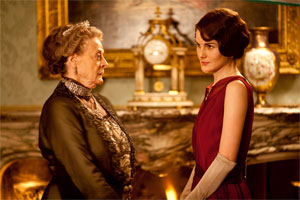 To me, “Downton Abbey” is currently the single best show on television, and I’ve been eagerly looking forward to this fifth Season. It did not disappoint at all, and if anything, it once again primed me for more. The sad part is, of course, that we’ll have to wait yet another year for the next season, but alas, there’s little we can do about that, short of re-watching the previous seasons.

Why is it that the best shows always have the shortest seasons? Perhaps PBS could consider turning “Downton Abbey” into a full-fledged 24-episode per season attraction. Now that would be something… but until such a time, Blu-Ray releases, such as this will have to suffice and quit honestly, there is no reason at all why anyone should pass on this one.