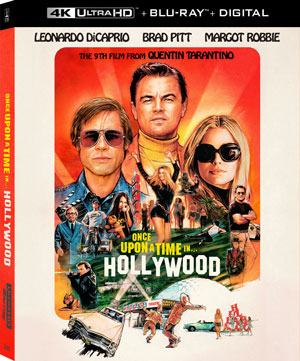 Sony Pictures Home Entertainment has just unveiled details about the upcoming home video release of Quentin Tarantino’s ninth feature film, Once Upon a Time in… Hollywood, bringing it to 4K UHD, Blu-Ray Disc and DVD in December.

The movie visits 1969 Los Angeles, where everything is changing, as TV star Rick Dalton (Leonardo DiCaprio) and his longtime stunt double Cliff Booth (Brad Pitt) make their way around an industry they hardly recognize anymore, told in multiple storylines in a tribute to the final moments of Hollywood’s golden age.

The release comes loaded with even more sights and sounds of the ‘60s, featuring over twenty additional minutes of footage that delves deeper into world of Rick Dalton’s Hollywood. The 4K UHD and the Blu-Ray versions will also contain Five Behind-the-Scenes Featurettes covering Quentin Tarantino’s Love Letter to Hollywood, Bob Richardson – For the Love of Film, Shop Talk – The Cars of 1969, Restoring Hollywood – The Production Design of Once Upon a Time…in Hollywood and The Fashion of 1969.

Collectors will also be delighted by exclusive packaging and gifts-with-purchase offered at retail for the film’s Blu-ray release. These include “Rick Dalton” movie poster cards available at Walmart, a vintage-style film magazine with over 26 never-before-seen production photos available at Target and a collectible steelbook available at Best Buy.

In addition, a limited 4K Ultra HD Collector’s Edition of the film will also be released on the same day, sure to make any Tarantino fan’s holiday wish list. Premium collectible packaging will contain a 7” vinyl record with two of the soundtrack’s grooviest tunes (complete with turntable adapter), a collectible vintage poster for the Rick Dalton film Operazione Dyn-o-mite! and an exclusive new MAD Magazine parody of the Rick Dalton TV series “Bounty Law, Lousy Law.”