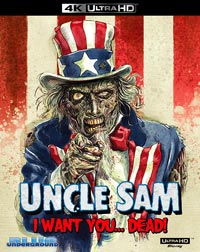 A happy fourth of July to us all, dear Americans—no offense to any international readers. A day of independence filled with good barbecue, fireworks, and a garish plastering of red-white-and-blue as far as the eye can see. And of course, like any holiday, filmmakers bestow upon us obligatory flicks to cash in on the seasonal occasion. However, rather than the typical go-to of Independence Day, Blue Underground offers us something a bit more bloody. Presenting Uncle Sam, a 1996 black comedy slasher written by Larry Cohen and directed by William Lustig.

The story goes that three years after a friendly fire incident involving a downed helicopter, the body of master sergeant Sam Harper is finally recovered, casketed, and returned to his sleepy hometown. From there, we follow his funeral proceeding through the eyes of his zealously patriotic nephew, Jody Baker—played by a young Christopher Ogden. Apparently, for “mysterious reasons”, Jody appears to be the only one truly respecting his uncle. Everyone else refers to him only in hushed tones. It seems as though everyone in town just doesn’t respect the “American way of life” anymore, and somehow for unexplained reasons, the local’s disdain manifests into a supernatural force, reawakening Sam Harper’s rotting corpse. He begins to hunt down anyone who’s made a mockery of the nation, one by one.

While this approach towards the murdering-naughty-teenagers slasher trope sounds amusing on paper, it is a bit of a stretch to say that the movie ever quite reaches the same peak of violent entertainment. In all frankness, the movie is a bit of a slog for most of its runtime. The opening prologue welcomes viewers with a few thrills, but it takes another good forty minutes after that before any more action ensues—which is a bit disappointing. Not that the time between those points wasn’t fun. It was certainly entertaining to watch an über-conservative little kid randomly pointing out individuals and calling them out as filthy liberals. I don’t think, however, that that is what most viewers signed up for when they decided to watch a slasher flick. What they most likely came to see are kills, and unfortunately, the movie doesn’t properly deliver on that end. Many of the kills happen off-screen and the majority of the rest have been overtly tamed down.

A couple of them gave me a good chuckle, though. The majority of the murder sequences are revolving around some sort of corny, gallows-humor punchline—my personal favorite involving a certain hatchet. However, you can probably count off the number of shots in the entire movie that warranted an R-rating on one hand. I guess in a way it can be argued that the movie as a whole emulates some of the mid-entry Friday The 13 films like Jason Lives with its tongue-in-cheek approach to the kills. However, it also seems to suffer from the MPAA’s gratuitous censorship around that era, like the one in The New Blood where the amount of splatter could probably be held in a cocktail glass. But that aside, there’s still the matter of tone.

Despite being marketed primarily as a slasher film, Uncle Sam hardly ever exhibits the spirit of one. Aside from a handful of faithful slasher moments, the majority of the runtime has a notable PG-13 tone. Its lack of explicitness results in a weird, campy hodgepodge that targets neither adults nor youths. The majority of the time is dedicated to Jody and his childlike, militaristic views of the world. There is only one instance of it ever pushing past that when random characters tell stories about the consequences of war. By the time the movie remembers it is a slasher film, you feel a little robbed because now you kinda want to see more of Jody. For me, probably one of the highlights of the movie was just seeing him interact with Isaac Hayes—who, I would argue, was probably the most likable character in the entire picture. This comes through in the climax in particular when the slasher aspect is shelved once more and the two end up tag-teaming for the remainder of the movie. It kind of makes you wonder whether the marketing was more confused than the actual production itself—not that the product is objectively perfect by any means.

Even with the right mindset going in, the pacing is all over the place ranging from stagnation to messily rushed, with too many subplots that don’t ever really pay off. (What was the purpose of the tragic, crippled kid, for example, who had no more than a handful of lines?)

The acting is mediocre for the most part, despite its heavily advertised, star-studded cast. Fortunately, the child acting falls into the “stilted” category as opposed to the “annoying” one. The patriotic satire is very hamfisted and can easily turn off viewers, I’d imagine, especially in our current political climate. All in all, I’d say that although the movie consistently entertained, I was never particularly elated.

As far as presentation goes, Uncle Sam is presented in a stunning new 4K UHD release by the director’s own company, Blue Underground. The brand-new 4K restoration stems from the movie’s original camera negatives, making this master nice, clean, and highly detailed without any visual flaws. The Dolby Vision grade is absolutely solid and leaves nothing to complain about. Its presence is much more nuanced than some other releases out there and gets a beautiful workout towards the explosive finale, soaking the scenes in richly gelled lighting. Apart from those vivid segments, the movie’s palette is fairly neutral with lots of icy color tones, especially during the nighttime sequences that are bathed in silvery moonlight. I’m not sure how the movie originally looked when it was photochemically treated for a theatrical release print in the 90s, but I’ll assume the color grading done here is about on-par given William Lustig’s inherent and direct involvement in the restoration process. It all certainly looks a fair way nicer than its previous incarnations.

For audio tracks, ignoring commentaries for the moment, we are presented with fewer options than the usual Blue Underground release: An English 5.1 DTS-HD track along with a brand new Dolby Atmos remix. Before anyone has a kneejerk reaction that there is no 2.0 Dolby matrixed option, I do want to point out that the movie was originally released in Dolby Digital, likely making 5.1 the original theatrical mix, (and I’ll assume most screens today can downmix surround mixes to stereo) in an uncompressed audio format. The Atmos mix is a nice option for anyone who’s looking to experience the movie in a new format and serves as perfectly a suitable substitute for the 7.1 remix that was found on the prior Blu-ray release. It’s also certainly nice knowing that—similarly to the color grading—this remix was Lustig-sanctioned. All revisionism arguments aside, the mix at least saw direct director supervision and approval for this release. Also as a nice bonus, the movie includes subtitles for any French and Spanish viewers out there.

All of the extras on the release have been carried over from the prior release without any new additions. Considering that these extras are exhaustive and complete, this is perfectly fine and ensures that no previous extras have been lost in the shuffle. We’ve got two commentary tracks, one with William Lustig, Larry Cohen, and George G. Braunstein, the other featuring William Lustig and Isaac Hayes. It’s nice as always to listen to these as they are a peek into the behind-the-scenes exploits that help explain some of the movie’s stranger moments. There is also a commentary by Spiro Razatos regarding the fire stunt in the movie’s climax, some deleted footage from an old tape-transferred workprint, and the obligatory compendium of posters, stills, and the original theatrical trailer.

It’s a solid package as a whole, but given this movie came out the same year as Scream, it’s no wonder it’s been mostly forgotten as a 90s slasher. For better or worse though, the movie at its core is pure cheese, so your mileage may vary. It’s a great choice, though, for fans of William Lustig’s filmography, slasher fans who want to try out something outside the genre mainstream, or just general horror fans looking for something fun to watch over the summer.