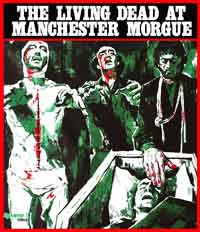 It is not every day that you come across a zombie movie predating Dawn Of The Dead. It’s also most certainly not every day that you’ll stumble across a zombie movie that seems to be arguably considered an elevation of the genre within that specific timeframe. However, I suppose today is just one of those days, as I’m having a gander at the 1974 Spanish cult classic Let Sleeping Corpses Lie, directed by Jorge Grau.

The movie follows a young woman, Edna, and a male shopkeeper, George, who happened to accidentally collide—quite literally—at a gas station on the outskirts of Manchester, England. With George’s motorbike now out of commission and Edna’s car being the only means of transportation, the two agree on a reluctant compromise to make each of their ends meet. Hesitantly, they head off deeper into the countryside to Southgate, towards the estate of Edna’s sister. Unfortunately, it seems fate has a different plan for the two, and soon they find themselves stalked by a mysterious, fetid figure with a hunger for the living. I won’t go any further than that because I believe the movie is at its most fun without any spoilers, allowing the wild plot elements to do their magic instead. 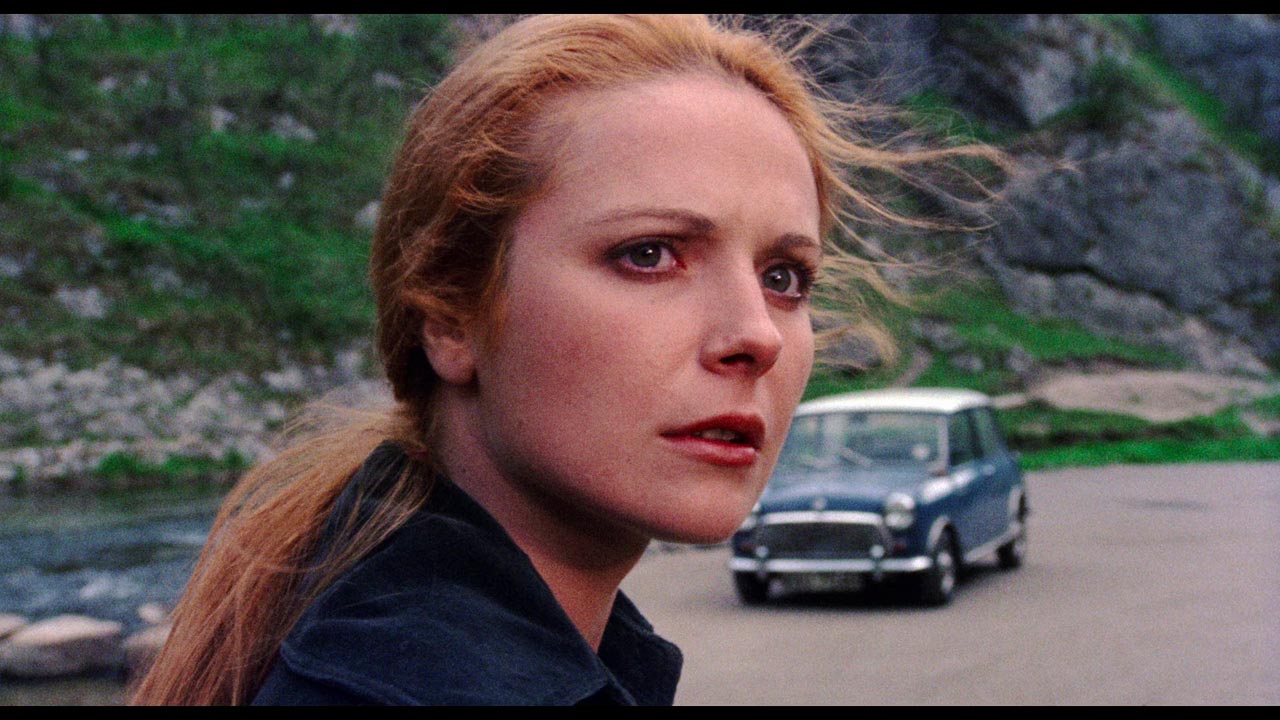 Conceived as a direct response to Night Of The Living Dead, the producers intended the movie to cash in on the genre’s success by recreating George Romero’s zombie formula. Only this time with the modern advantages of full color and contemporaneous sensibilities. However, it is mostly that last bit that makes the film challenging to judge in the modern era.

In a lot of ways, it’s very much a product of the 70s with how it handles the movie world logically and thematically. Drawing heavily from science-fiction, the film relies heavily on fictional pseudoscience to explain the undead epidemic. While I can say that it is most definitely imaginative, it also comes off as a complete absurdity nowadays. Borrowing from Romero’s handling of the genre, the movie also likes to go out of its way to use the world as a platform to bleakly satirize the times—notably governmental authority, Satanic panic, and environmentalism. Much of Romero’s Dead trilogy aged like fine wine over the years. Unfortunately, the same cannot be said for this movie. The majority of its references age the film for better or worse. I’ve personally found it charmingly cheesy, but I can see how it would potentially turn off viewers in equal measure. 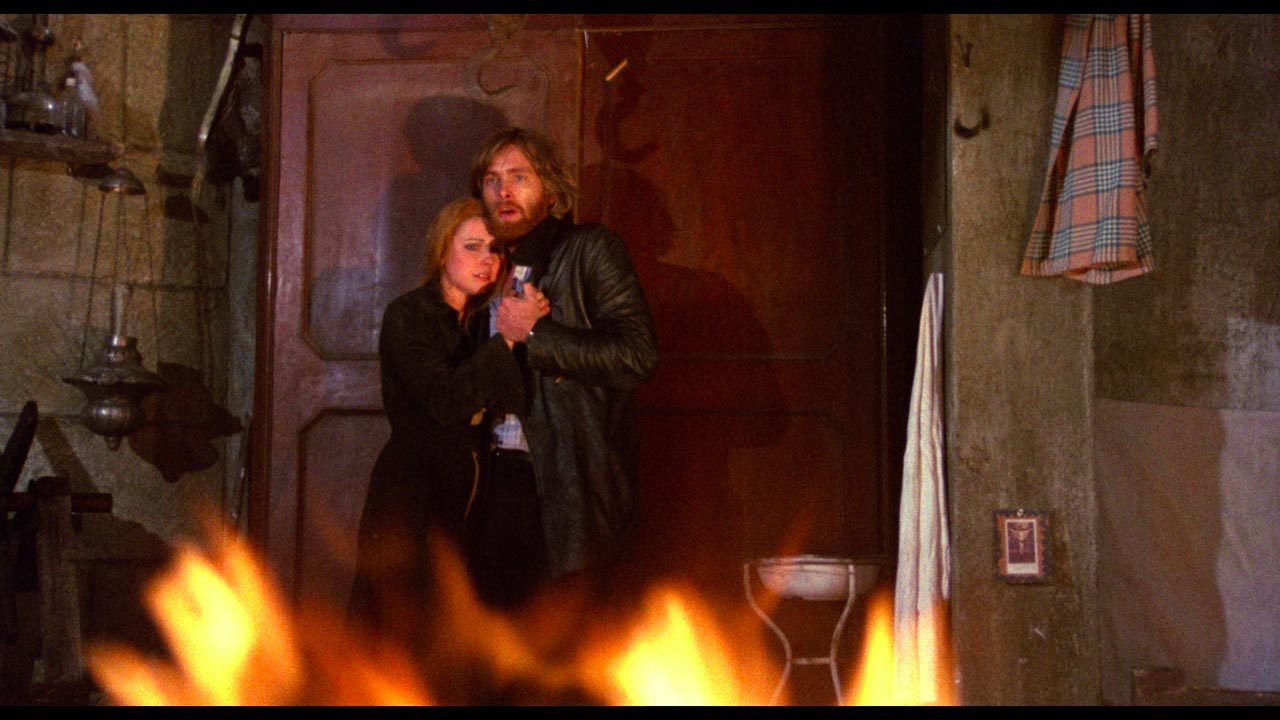 Of course, though, I’m not sure how many of you choose to watch a zombie movie for political purposes. My assumption is, though, that most just want to know if it is fun and has enough guts to spread around. Thankfully it does not disappoint on either front. For early-70s fare, the movie is surprisingly versatile in the horror department.

Making full use of the solitile landscape of real-world Derbyshire, the movie has a thick and palpable atmosphere that is then emphasized by an uncomfortably atonal soundscape and voyeuristically-lingering cinematography. It’s simply amazing how tense the movie can be given how everything else aged so poorly, and that’s before a zombie ever makes an appearance. The first time you do see one on-screen is genuinely unsettling. What’s more, is that this movie is surprisingly graphic for its age. Completely unafraid to showcase victims being torn apart and disemboweled on-camera—with surprisingly convincing effects. Perhaps it should not be all that surprising though, since the effects were produced by Gianetto Di Rossi, who later went on to perfect his gore effects in Lucio Fulci’s Zombie. 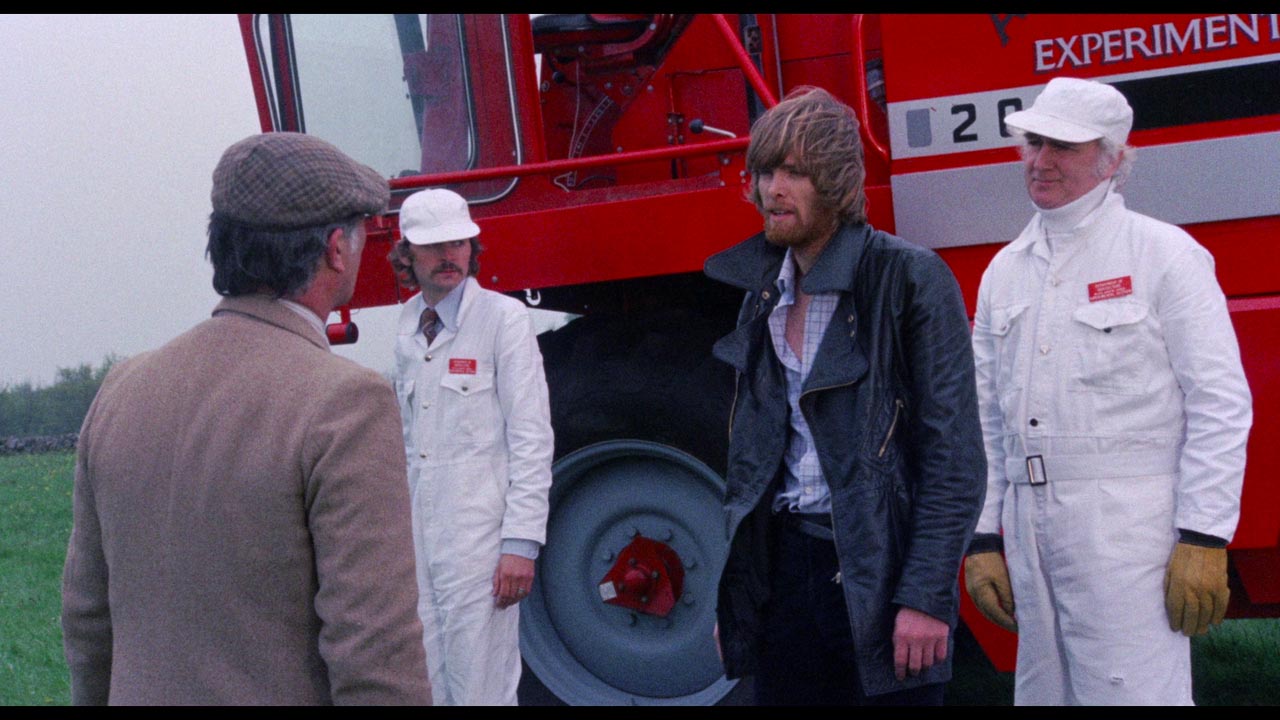 Not everything is perfect about the film, though. Every so often a moment will completely break the immersion and zap you right out of the on-screen tension. Lapses in character logic mainly (“Ah yes, let’s trap ourselves inside a tiny building instead of running away to safety”) as well as the fact that zombies are apparently about as flammable as kerosene-soaked tissue paper. There’s also the odd sequence or two that just doesn’t work and comes off as rather laughable—the most prominent example involving a hospital nursery. It’s nothing earth-shattering nor new to the genre, but it’s certainly detrimental when contrasted with how effective the suspense is in other parts of the film.

As far as the actual Blu-ray Disc goes, this new Synapse restoration is certainly a huge upgrade from the previous HD master provided by Blue Underground, which suffered from extreme DNR. Thanks to a new 4K scan off of the original camera negatives, not only is the resulting master far more detailed than anything we’ve seen prior, but the colors as a whole are brighter and more nuanced than ever before. The color grading is a bit questionable in some areas, with a majority of scenes having a magenta lean to them, as well as certain scenes lacking consistency between shots. This is most notable during nighttime during which shots frequently oscillate between blue gelling and neutral lighting. It doesn’t hold an extreme presence over the image mind you, but it was noticeable enough for me to wonder how an original photochemically-timed release print may have looked back in the day. 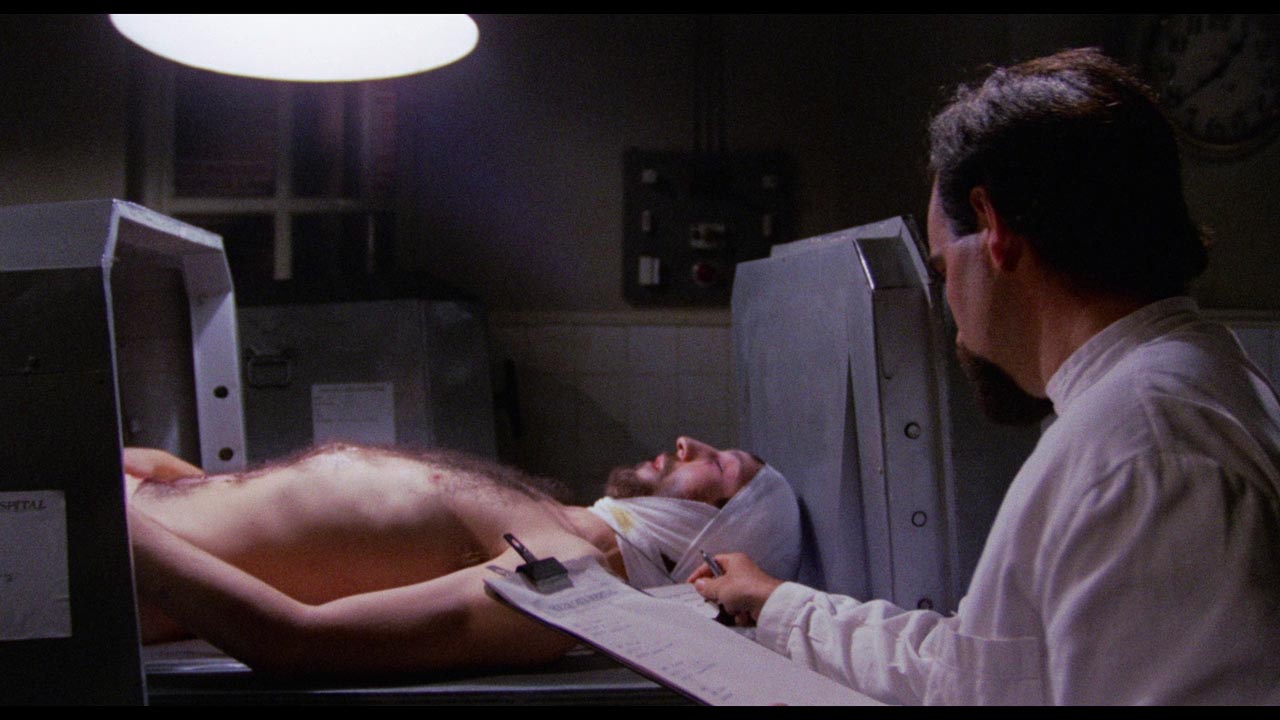 The opening title card for the movie is also a point of contention as only the export Manchester Morgue version has been restored rather than the original Spanish one. It’s not a huge detractor, but I can understand why it’s not preferable.

You encounter a similar situation in the audio department where only English-dubbed tracks are available. The dub itself is surprisingly decent and the notable presence of UK accents certainly helps to blend the characters in with the setting. However, given the fact that this is a Spanish movie, it does feel rather strange to realize that the original Spanish audio is nowhere to be found. Moreover, this movie has been famously touted as being one of the earliest examples of a horror movie being mixed in stereo, so the fact that the original magnetic four-track mix has yet to be restored on any disc is rather depressing, particularly because the English dub was originally a mono mixdown.

While there is a brand-new 5.1-channel remix that’s been produced for this release, it was detailed in an insert booklet for the steelbook release that the original magnetic three-track stems for the English mono track could not be located. It puts into question just how much of a surround remix can be done when all the engineer had to work with was an optical mono track. The answer? Not particularly much, apart from applying spatial reverb, funneling in low-end audio to the LFE, and overlaying snippets of the soundtrack over the surround channels. It’s not terrible, but its limited and revisionist nature will likely appeal to only a few, not to mention the Blue Underground release already had its own 7.1 remix—not that it was particularly brilliant either. 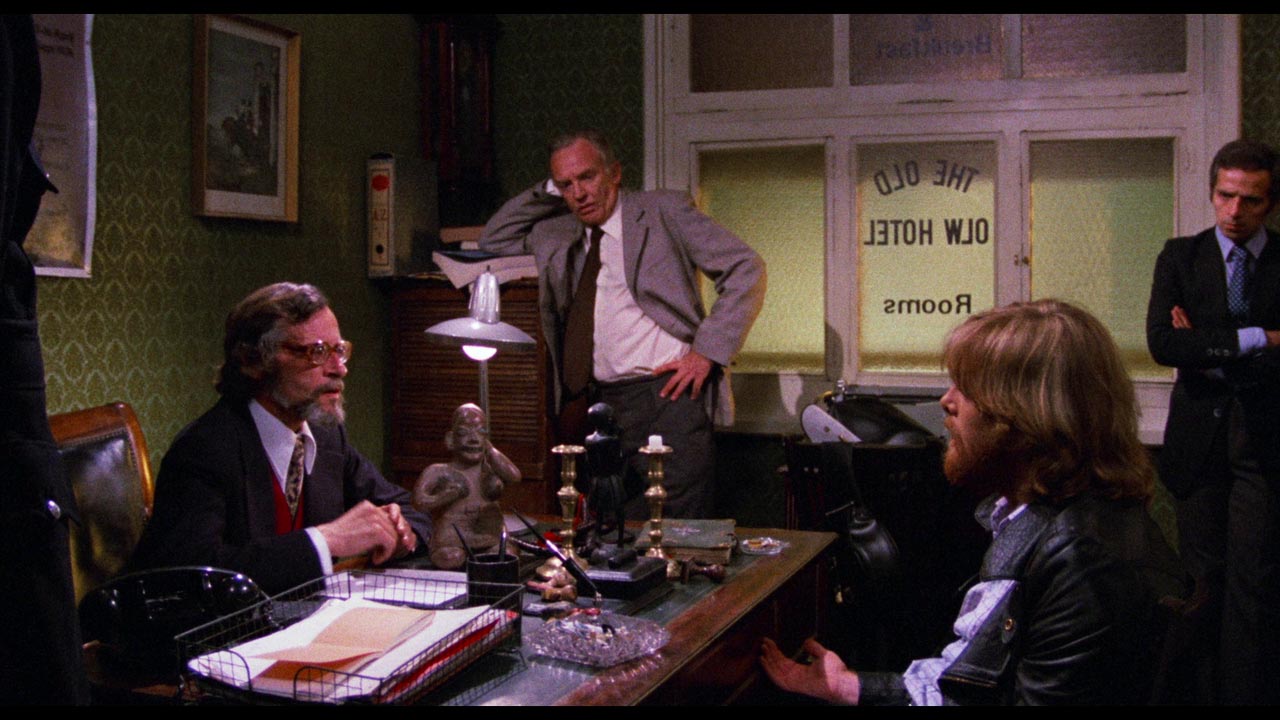 The thing that disappoints me is that money was poured rather into creating a pseudo-effective remix rather than attempting to restore the original Spanish mix which was already in true stereo surround. Perhaps the answer is that these original elements have been lost, just as the English dub’s stems have. It all makes me desperately want to know how the audio was mixed for that given how the mono mix has an inordinate amount of abstract depth to it—constantly pulsating with superimposed moans.

In the extras department, you’ve got a decent little repository of original advertisements: The international Manchester Morgue trailer as well as the alternate title, Don’t Open The Window, TV and radio spots. You’ll also find a small handful of interviews with the production’s crew as well as a whole documentary dedicated to Jorge Grau on the release. It’s all good stuff and provides valuable insight into what went on behind the scenes of the movie. Also included are two newly recorded commentary tracks by film scholars, something that is always a nice listen for fans interested in more background and historic context. 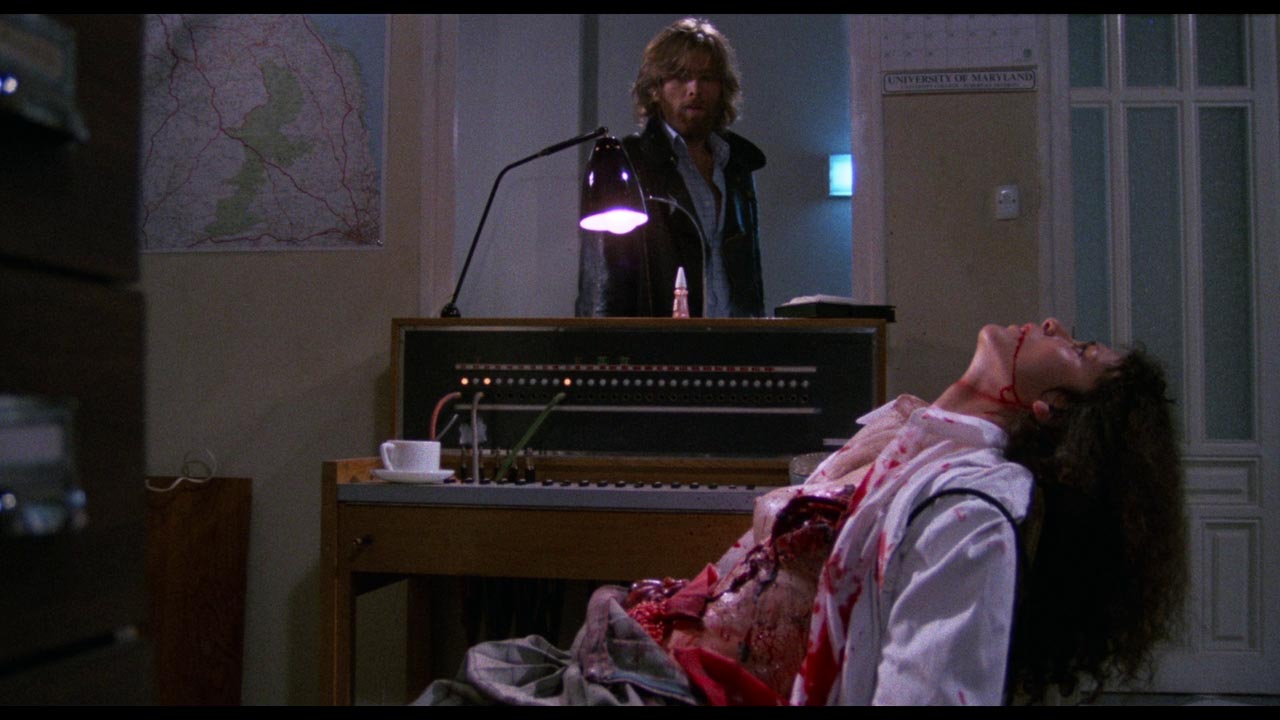 All in all, The Living Dead At Manchester Morgue is a really solid zombie movie for its time. In fact, it probably WAS the best zombie movie in its day, I imagine, given it has all of the genre staples. For me as a spoiled modern viewer, I’ll admit that it’s not what I’d personally pick up if I were in the mood for a good zombie movie—always favored Romero’s black sheep Day Of The Dead for that. I can see, however, why it has garnered such a strong cult audience over the years. As such, I’d definitely recommend this to any horror fan and suggest you’d at least give it a try. Real zombie fans clearly have to pick up a copy, no question.

Thankfully now that a standard Blu-ray version is available, it should be an easier choice to make, as the limited steelbook version that was available previously appealed mostly to hardcore fans. Too bad that no 4K UHD release has been slated at this time, but it’s certainly not off the table, I suppose, given that a 4K master technically exists now. Who knows, perhaps it will also serve as a second chance to get ahold of the original Spanish elements, wherever they may be.