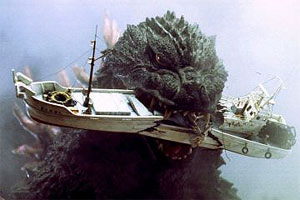 Continuing their line of Godzilla double-features on Blu-Ray Disc, Sony Pictures Home Entertainment has just released the fan-favorite, “Godzilla 2000,” in high definition. the double-feature presentation in this case does not include a second movie, however, but instead gives fans to choose between the US theatrical version of the film and the original Japanese version.

The film was Toho’s response to the Roland Emmerich-helmed tuna-eating disaster from 1997, which seemed to have seriously derailed the franchise. Going back to its roots, as a result, “Godzilla 2000” contains everything fans of the series want to see. The King of Monsters stampeding through Japanese cities, a duel with another monster, and of course Godzilla the way we have come to love and recognize him.

Godzilla is back with a vengeance! Without warning, the monster surfaces off the shores of Japan once again and lays waste to towns, and power plants in particular. At the same time, scientists manage to raise a big meteor from the bottom of the sea, but suddenly, what only seemed to have been a meteor takes on a life of its own. It is a spaceship from another planet that has been slumbering at the bottom of the sea for 6 million years. Powered by sunlight, once at the surface, the spaceship suddenly becomes a thread to mankind, as the alien invader destroys cities and hacks into local computer networks to absorb all the information it can find about mankind. Its plan is simple—to destroy mankind and to dominate the planet. But to achieve this goal, the alien invader has to kill Godzilla first. Using Godzilla’s own mutated cell structure, the aliens create an opponent for Godzilla that is fiercer than any he has ever faced. Orga is not only a venerable opponent for the Big G, but just as Godzilla, it is seemingly indestructible 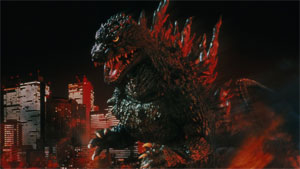 “Godzilla 2000” is a clear step back to the roots in many ways, and the result is absolutely resounding. After the Hollywood incarnation that had little to do with the real Godzilla, Toho decided to bring the Big G back in all its glory. Although “Godzilla 2000” features quite a bit of computer generated effects work, the film always maintains the traditional look and feel of the earlier Godzilla films, and in many instances resembles more Ishiro Honda’s 1954 original than any of the subsequent releases. This is evident especially in a series of finely staged shots, which reminded me a lot of the visual quality of Honda’s original work.

Still, Godzilla is a man in a rubber suit, basically, having fun stomping through miniature models. The difference is that the models don’t look that much like models any more and that the man in a suit is oftentimes photographed in a way that let’s you forget about his true nature. Combined with some of the CGI shots, “Godzilla 2000” is a very updated and at the same time very rooted approach to the giant lizard—something the series desperately needed.

Fans of the series will also appreciate the big entrance Godzilla makes in this film, having almost 20 minutes for himself to destroy Japanese cityscapes at will. These scenes are great and among the best of the destruction scenes in the entire series, combining practical shots with computer generated imagery. One word about the CGI work in the film however. Just as the rubber-suit is not exactly the most contemporary approach to create effects, so are the computer generated effects a little retro in their look. Especially a certain wobble effect that is used quite frequently throughout these shots, for all sensible and insensible purposes, quickly wears off and becomes a bit distracting. While in general the computer generated effects do not live up to Hollywood standards, they work fine within the confines of the film, making “Godzilla 2000” a highly entertaining movie with a bot of a modern touch.

As mentioned before, on this release you have access to the theatrical US cut of the film as well as the original Japanese cut. When releasing the film in the US, Columbia Tristar trimmed the film a little, cutting short bits and pieces throughout the film and rearranging a number of shots within scenes in an attempt to keep the film’s pace. As a result, there are well over 100 edits in the film. While it’s not a majorly different film, true fans of the film will appreciate the fact that they finally have the opportunity to see the film the way it was originally intended and designed. I leave it for you to decide whether it is a better film, or whether the American trims turned into something tighter.

Sony Pictures is presenting “Godzilla 2000” in a widescreen aspect ratio in a clean 1080p high definition transfer. In my review of the DVD version some years back I made mention that the film appears slightly over-matted, cutting of picture information on the top and bottom of the screen. It would appear I was correct. The US theatrical version has been re-matted to a 2.40:1 aspect ratio, while the original Japanese version is presented in its original 2.35:1 ratio. While the loss of information in the US version is not tragic, it does create slightly awkward balancing at times.

The presentation of both versions is mostly free of grain and is entirely without blemishes or defects. Some of the processed shots exhibit a bit of grain at times, but all in all, it is a truly beautiful presentation throughout. The film does not exhibit the hairline definition found on the top end of Blu-Ray releases, but it will for the most part satisfy viewers with an improved and slightly sharper image than the DVD version, that holds a good amount of detail and strong colors. In fact, there are numerous occasions during which the Blu-Ray transfer can play its muscles in terms of color reproduction, as the colorful production design offers plenty of shades and hues, all of which are perfectly reproduced on this disc, steeping the film in atmosphere. Blacks are very deep, creating a powerful look especially during the nighttime scenes, giving the image plenty of visual depth. Shadow definition is good throughout with details fully intact.

The release refurbishes the bonus materials found on the DVD release from 2000, and as such you will find the same commentary track on the release, featuring Mike Schlesinger, the uncredited writer/producer of the American version, Michael Mahoney, the editor of the American version, and Darren Paskal, the sound editor for the domestic version. It is a fairly interesting track that offers some additional insight into the film and the cast, and extrapolates nicely on the many changes and edits in the domestic version of the film. The track offers exciting insight also in production aspects that you may not necessarily expect from such third-party collaborators. 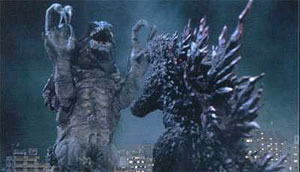 The disc also contains a few minutes of behind-the-scenes footage. This is edited together film footage showing Godzilla in front of a green screen, some shots as he wades through piles of miniature rubble and so forth. The movie’s original trailer rounds out the release.

“Godzilla 2000” is a lot of fun to watch, especially since it put the giant lizard back where it belonged, into the hands of Toho Studios. The film is larded with great moments, such as the first revealing shots of Godzilla and—ironically—the “Independence Day”-inspired explosion of the skyscraper. There are many more “Independence Day” references in the film, but I’ll leave it to you to spot them. Complete with a beautiful score, which features the great Gozilla-theme, and atmospheric images, “Godzilla 2000” is a great kaiju film that, in many was, rang in the second coming of the king of monsters, which in turn produced some great films, such as “Godzilla: Tokyo S.O.S.” and “Godzilla: Final Wars” in subsequent years.