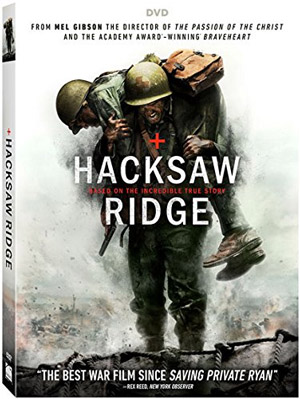 Hacksaw Ridge is the extraordinary true story of Desmond Doss (Andrew Garfield) who, in Okinawa during the bloodiest battle of WWII, saved 75 men without firing or carrying a gun. He was the only American soldier in WWII to fight on the front lines without a weapon, as he believed that while the war was justified, killing was nevertheless wrong. As an army medic, he single-handedly evacuated the wounded from behind enemy lines, braved fire while tending to soldiers, was wounded by a grenade, and hit by snipers. Doss was the first conscientious objector to ever earn the Congressional Medal of Honor.

The DVD version will contain the movie itself, along with a selection of Deleted Scenes and the Veterans Day Greeting with Mel Gibson.

The 4K UHD and Blu-Ray versions will feature the movie in a 4K or 1080p high definition presentation, respectively, along with a glorious Dolby Atmos audio track. The Deleted Scenes and Mel Gibson’s Veterans Day Greeting will also be included, of course, along with the Making-of Documentary “The Soul of War”.