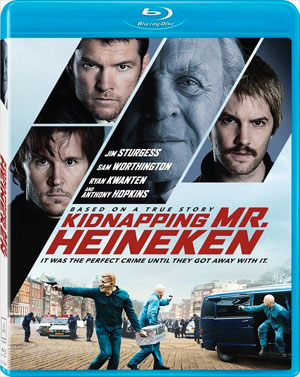 In 1983, a group of childhood friends pulled off the crime of the century: kidnapping one of the richest men in the world, the heir of the Heineken beer empire (Anthony Hopkins). The shocking capture—by gunpoint on the streets of Amsterdam—resulted in the largest ransom ever paid for a kidnapped individual. It was truly the perfect crime…until they got away with it. Based on a true story, “Kidnapping Mr. Heineken” also stars Sam Worthington, Jim Sturgess and Ryan Kwanten.

No bonus materials have been announced for the release, but you can mark April 14 in your calendar, because that’s when “Kidnapping Mr. Heineken” will arrive in stores for $24.99 on Blu-Ray Disc and $19.99 on DVD.