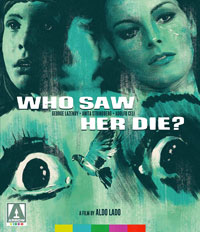 For some time now, I’ve been pining to see a decent giallo film to get re-released. Now, I don’t mean something absurdly sleazy like Strip Nude For Your Killer (Nude per l’assassino) nor something so cheesily over-the-top like The Iguana with the Tongue of Fire (L’iguana dalla lingua di fuoco). What I am referring to is an honest-to-God giallo that isn’t known for being absurd but rather for being a competently made, artistic, murder-mystery thriller. Sure, that may sound lame but hey, the last time I got to enjoy a giallo film that I consider to be truly well-made was last year when Arrow released The Case of the Scorpion’s Tail (La coda dello scorpione) which, admittedly, still had its flaws but in the end turned out much better than most other films in the genre.

Alright, enough petty venting. Time to get to the meat of things: Today’s topic is the Arrow release of the 1972 giallo film Who Saw Her Die? (Chi l’ha vista morire?), directed by Aldo Lado who previously made his directorial debut the year prior with a rather bizarre and obscure giallo with the title Short Night of Glass Dolls (La corta notte delle bambole di vetro).

The story opens up with a briskly pace prologue sequence taking place in Megève, France, 1968, treating us with some mother-daughter bonding on a cold and snowy day. What better way to introduce us to the heart of this movie’s subject matter than to follow this sweet and innocent sequence—not even three minutes into the runtime—with the child being clobbered on the head repeatedly with a rock by an unknown assailant with black, crochet—surprisingly not leather—gloves? From there, the setting completely changes by moving us to Venice, Italy, in the year 1972, where we are introduced to divorced artist Franco and his visiting daughter Roberta, as they spend some quality time together. However, this seemingly innocuous interaction doesn’t go unnoticed when Roberta catches the attention of a killer and is promptly stalked throughout the town. As you may already imagine, things end as well as you may expect: With her disappearing one evening only to be found floating lifelessly in a Venetian canal the following morning.

With funeral processions carried out shortly after, it suddenly comes to Franco’s attention that his daughter’s death shares some rather uncanny similarities with the Megève child murder that occured four years prior. Most notably, both victims were redheads—which you know will somehow be relevant given the way that fact is presented. Fueled by his own remorse, much to his ex-wife Elizabeth’s dismay, Franco becomes determined to play detective, digging through the past for clues, in hope of finding the identity of his daughter’s killer. If you’ve seen any gialli flicks, you’ll know exactly what road this will all end up going down: Blackmail, sexual exploitation, and the whole gamut…you name it!

If it wasn’t obvious from the start, I think this is one of the much better examples of the giallo genre. This movie stands out in the genre for being quite somber in terms of tonality, especially during the first half of its running time, making it a rather unique experience, since you actually develop some empathy towards the main characters. It also serves as probably one of the only giallo films I’ve seen where the protagonist’s motivations are far more believable than in other films, given the whole personal vengeance aspect behind it all—I mean seriously, why do most gialli protagonists want to risk their lives to solve some random murder case for no real reason?

It’s also a stand-out for the subject matter itself by being one of the handful of gialli that is about child murder—with Lucio Fulci’s Don’t Torture A Duckling (Non si sevizia un paperino) being the other notable example, of course. But most of all, I think what makes this movie work for me, is that it has the near-same level of quality as Dario Argento’s earlier works, such as The Bird with the Crystal Plumage (L’uccello dalle piume di cristallo) which I do consider to be the near-peak of the giallo genre. I say that especially for the latter half of the movie when more and more dirt is being dug up and bodies start piling up. The entire plotting is really tight, thrilling and suspenseful.

Going into specifics, I suppose, let’s talk about a bit of the acting. If you haven’t heard already from every promo in existence for this movie, the protagonist Franco is played by George Lazenby, who is most notably known for having played James Bond back in ‘69’s On Her Majesty’s Secret Service. While he made for a decent Bond stand-in, his acting performance in this movie is a bit… odd? I don’t know, you can tell he did everything he was supposed to do with confidence, but there are times where the dubbed audio was far more emphatic than what his facial expressions suggested—most notably, whenever you hear him yelling. I’m not sure what’s to blame for this quirk since, on one hand, it could just be Lazenby delivering his lines as he was instructed, or it could just be him not even trying. I truly do not know, but it does make the already loose dubbing even more noticeable than usual in various instances. Young Nicoletta Elmi, who played Roberta, did a decent job at just being a child on-screen, all innocent and gleeful—which is admittedly a bit jarring when you recall her notably sadistic performance in Deep Red. Anita Strindberg made the best of her—admittedly sparse and weakly written—role as Elisabeth. As for the rest of the cast: I think they all played their roles competently.

What the film perhaps lacks in acting-power, it easily makes up for in style. The cinematography by Franco Di Giacomo isn’t anything stand-out-ish, but there are some nice shot compositions throughout, and with nearly the entire movie taking place within the Venetian cityscape, the gloomy canals and sprawling plazas were captured beautifully on film. It’s really one of those scenarios where the gorgeous setting does all of the work for you, serving as a reminder as to why I love the settings so much that you get to see in gialli like these. I’m also quite a fan of the point-of-view sequences in the film, where they layered a thin veil over the lens, giving it a nice immersive touch. The only issue I can point out was how some of the handheld work is a little too shaky in certain scenes. You can clearly tell that the filmmakers attempted it to be steady but had to make do with their given camera setup.

Musically, the score composed by the prolific Ennio Morricone is really something to behold. In fact, in my personal opinion, I would conclude that this movie’s soundtrack is not only a real milestone in his career but that it is probably the best giallo soundtrack he’s ever produced. Heavily relying on faux children rhymes and choirs, it creates a distinctly verbose soundscape throughout the film, reinforcing the movie’s grim themes and tones elegantly. It’s a score that makes me wish I knew Italian so I could further appreciate the lyrics and the meaning transcribed into each of the compositions rather than just listening to it on a surface level, almost as beautiful noise. Paradoxically though, I should state that the music isn’t particularly great in the movie sometimes due to the lack of subtlety and dynamics in the audio editing that’s often heard in Italian flicks like these. The way the music just abruptly cuts in and out on occasion with a lack of any kind of variation with some of the tracks makes for a rather jarring and repetitious auditory experience at times. I feel that especially the killer’s theme, “Canto Della Campana Stonata”, has suffered the most from this problem. In fact, there was this one moment during the climax, where the way the music cuts out as the killer lands from a rather hard tumble that made the shot so unintentionally comedic that it actually made me laugh out loud.

As always Arrow has provided a wonderful transfer of the movie, taken from a new HD master of the film, freshly pulled from a 2K scan of its original 35mm 2-Perf Techniscope camera negatives. As usual, the grain is what you’d expect, particularly for a film shot in 2-Perf mode. Therefore, grain varies throughout but never becomes too excessive nor minimal, giving the movie that pleasingly rough yet organic look. Colors look solid and appear quite natural—yet creamy throughout. Although I am unaware of how the movie looked back during its original theatrical run, I can at least say this transfer looks noticeably nicer than the previous Anchor Bay/Blue Underground/Shameless SD master which had an unappealing pastel-green tinge throughout.

The mono audio tracks provided in the transfer is exceptionally clean with minimal noise as far as I could tell. As for whether or not the English or Italian track is better, I cannot really say since they’re both pretty much exactly what you’d expect from a foreign movie from this time period with neither being particularly superior. I will at least note that I did end up watching the movie in Italian since I’ve personally found it worked better in tandem with Morricone’s lyrical score than the English track that just sort of ended up being a hybrid track—for lack of a better term. I don’t know, that’s up to you and your personal preferences to decide.

As for extras, Arrow brings a nice haul of things to check out as always with a good handful of new interviews from original cast members and enthusiasts as well as an audio commentary by Travis Cra… wait, scratch that, Troy Howarth (I don’t know why Crawford ended up pulling out originally but either way, a commentary is a commentary), an image gallery of posters and lobby cards as well as the original trailer in both languages. As a little side bonus, this master is actually uncut which is something new to Region A viewers, so that’s pretty groovy. So overall, this release is definitely a step up from its previous DVD releases.

Wrapping it all up, I’d say that this is one of the far better examples of what the giallo genre has to offer. Sure, it may not offer as much exploitative content as one may want or expect if you’re a fan of Sergio Martino styled gialli, but if you like things more along the lines of Dario Argento’s Animal trilogy then this is most definitely something worth checking out. (Side-note: still holding out for a proper Arrow release of Four Flies on Grey Velvet (4 mosche di velluto grigio).) Anyways, I’d argue the disc is worth the price tag and I would highly recommend purchasing this release if you are a fan of the genre. Now then, seeing as to how Arrow managed to get the rights to this film, I’m definitely curious as to where the rights currently stand for Lado’s previous venture Short Night of Glass Dolls. I’d certainly love to see that get the Arrow treatment sometime in the future—amongst others, but that’s for discussion another time.