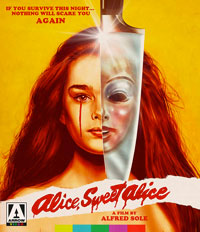 Arrow Video appears to have a strong knack for digging up obscure films that I have never heard of up until the day I read about them in a post teasing the company’s upcoming catalog. Today’s review is for one such film: “Alice, Sweet Alice.” Originally premiering in the UK (despite being a U.S. film) in late 1976 under the title “Communion” the movie was released internationally the subsequent year with the changed title, “Alice, Sweet Alice.” Several years later, in 1981 to be exact, the movie was then once again re-released, this time under the title “Holy Terror” and in ‘86 reappeared as “The Daughter Of Satan”… Okay, I admit, I’ve made that last part up, but I wouldn’t blame you for believing me. The point is that this movie’s been ping-ponged around for some time and has since sort of fallen into obscurity.

“Alice, Sweet Alice” starts out with a little slice of life for single mother Catherine Spages and her two constantly-feuding daughters Karen and Alice. As soon as the film has established this, we promptly witness an ill-fated communion during which young Karen ends up dead and charred to a crisp. With a lack of witnesses and no more than circumstantial evidence, suspicions emerge that the rebellious sister, Alice, may have been the killer. From there, things take a downward spiral when Alice’s—prick-ish—aunt is found stabbed. The perpetrator? A girl in a familiar yellow raincoat, wearing a strange, translucent mask.

With the police determined to convict Alice for the crimes, the family is gripped by desperation, as Catherine and her ex-husband Dominick begin to realize that the only way they can exonerate their daughter is to prove the true identity of the killer.

Now if that began to sound like a giallo towards the end there, you’re not entirely wrong, and in all honesty, I am not quite certain what genre I would put this movie in, really. It’s definitely a horror movie, no question about that, but I am not sure what sub-genre it falls into. It’s not quite a giallo even though it does borrow heavily from the genre, such as the whole amateur sleuth aspect, the red herrings, the mysterious killer running amok. It even bears some resemblance to religiously-themed gialli like “Don’t Torture A Duckling,” but it doesn’t quite fully fit the template. It is also not an outright slasher flick like Halloween, either, forcing it to sort of slip in the middle as a kind of proto-slasher like “Black Christmas.” However you may look at it, though, the movie is an interesting hybrid, to say the least, combining what I’d consider to be the best of both worlds.

A discussion of the film for review purposes is a bit tricky, I have to admit, because, in a way, there is not all that much that is standing out in a particular fashion. I suppose I could start by giving praise to some of the acting. Especially Paula Sheppard did a great job at avoiding the pitfalls of being flat-out annoying as the titular character—something that many child roles seem to fall into, especially in the horror genre. There is a bit of irony to be found in the fact that despite her excellence, she went on to work on only one other film, while Brooke Shields, who played Karen had less than fifteen minutes of screen time and went on to enjoy a full-blown career that lasts to this very day. Yes, you read that right. Brooke Shields is in this movie. Bet you TOTALLY didn’t notice that when her name’s being plastered all over the store page and promotional materials: “A young Brooke Shields meets an untimely end in this religious-themed proto slasher par excellence from director Alfred Sole.” As an indie production, you have to grab on to whatever leverage you may find. I understand… it just feels somewhat strange that part of the movie’s claim to fame lies in Brooke, who barely made an appearance in the film.

Cinematography-wise, the production was shot well-enough. There were a handful of shots scattered around that I thought looked very cool, in fact, but I can’t quite point to anything that particularly wowed me, which I suppose you could jokingly say is what separates this film from most actual gialli. The movie offers up a decent score with some admittedly haunting tracks that help the movie remain tense and suspenseful, but it’s nothing I’d really write home about, personally. The pacing never gets too slow, the story doesn’t ever quite get too convoluted, the effects serve their purpose well-enough and despite their limited budget, they don’t look outright cheesy even with the bright color and consistency of the red paint—I mean, uh, fake blood—that permeates the shots. So, in a nutshell, I don’t have any real complaints about this movie, which in itself is kind of interesting, considering how obscure this movie has remained.

As for the transfer itself, Arrow Video has done it yet again, proving us with a pretty nice-looking transfer that has undergone a 2K restoration—or 4K according to the pamphlet inside my copy. The grain level varies throughout but it never gets overbearing and is kept at a pleasingly level, providing just enough to remind us that it was shot on film, yet keeping it from looking too smooth and waxy. The colors appear vibrant throughout, albeit with a noticeable creamish/greenish hue that just sort of permeates most of these transfers of films from the 70s. I’m not sure if this was a color push seen originally in its 35mm theatrical prints, but I suppose ignorance is bliss.

The mono audio track provided with the transfer is nice and clean with minimal noise as far as my ears could tell, though it definitely does give away its age with a lack of depth resultant of the production’s—and time’s—technical limitations. The only thing I would really note as a possible issue was that the end credits do not have any music, which is odd since I ended up stumbling onto an older transfer of the movie online that features looped music during the closing credits. What to make of that? I am not entirely sure.

As for extras, Arrow Video provides quite a handful of things to check out, such as some audio commentaries, cast interviews, a revisit of locations, trailers, deleted and alternate footage, and more. There’s also the inclusion of an “Alternate Holy Terror Television Cut”, though I cannot give you my opinions on it in comparison to the theatrical cut since I admittedly haven’t checked that out. All-in-all, it’s a pretty good haul like most other Arrow titles.

Let me begin my final verdict by saying that “Alice, Sweet Alice” is quite an underrated movie and I am positively surprised that I had never heard of it until now. Having said that, however, it is a film I doubt I will ever revisit for another viewing anytime soon. Don’t get me wrong, it’s not a bad movie, but I don’t feel inclined to label it as anything particularly great either. Let my somewhat paltry criticism of it earlier on be an indication of my feelings, because it does come down to personal preference more than anything else. If you’re a fan of the horror genre and this sounds like an interesting pick, definitely go ahead and check it out some time, and if you’re a fan of the slasher or even the giallo genre in particular, I’d definitely say it’s worth grabbing a copy right now!