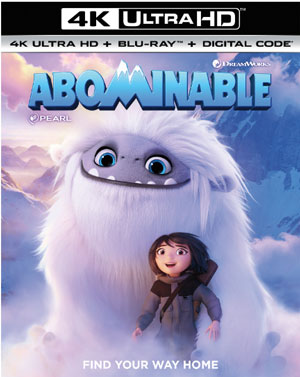 Universal Home Entertainment has added the Dreamworks Animation feature Abominable to its roster, scheduling a release of the film on 4K UHD, Blu-Ray Disc and DVD in December.

Abominable is the heartwarming and humorous story of teenage Yi (Chloe Bennet) as she encounters a young Yeti on the roof of her apartment building in China, she and her mischievous friends, Jin (Tenzing Norgay Trainor) and Peng (Albert Tsai), name him “Everest” and embark on an epic quest to reunite the magical creature with his family at the highest point on Earth. But the trio of friends will have to stay one step ahead of Burnish (Eddie Izzard), a wealthy man intent on capturing a Yeti, and zoologist Dr. Zara (Sarah Paulson) to help Everest get home.

Also included is Marooned a Short Film that tells the story of a cantankerous and selfish robot named C-0R13. Stranded on an abandoned lunar outpost, C-0R13 longs to return to Earth. With a partially built ship and his last power source, this determined robot will stop at nothing to achieve his goal.

In addition, the release comes with the Deleted Scenes “Play All,” “Spa Day,” “Villains at the Map,” “Magic Montage” and “Yak Attack”, each with introductions by the directors.

Then, there’s a host of Featurettes, such as “Show and Tell,” “Animating Abominable,” “Meet the Cast” and a “Making Of Featurette”. “Your Yeti Care Guide,” “Courage to Dream,” “An Abominable Tour with Chloe Bennet,” “Everest’s Talk Box,” “How to be Abominable,” “Nai Nai Says” and “Cooking with Nai Nai” will be featurettes also included on the release.

The release will be routed out by a language course “You Can Speak Yeti-See.”