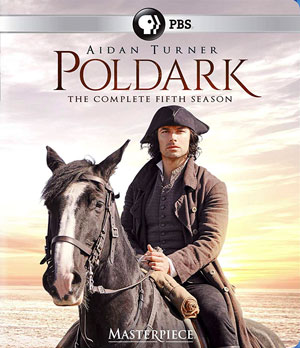 PBS Distribution has just added Poldark: Season 5 to its release roster, scheduling the 3-disc Blu-Ray and DVD release in mid-November along with a collection of the entire saga.

It’s a new century and with it comes the promise of a hopeful future, but the past casts a long shadow over Cornwall. Following the death of Elizabeth, Ross Poldark (Aidan Turner) resolves to put Westminster behind him and spend more time with the people he loves. However, when an old friend needs help, Ross is compelled to challenge the establishment and question his own loyalties to king and country. As the Enyses (Luke Norris and Gabriella Wilde) rally to join the cause, Demelza (Eleanor Tomlinson) must contend with dangers close to home, while George (Jack Farthing) courts corrupt powers whose influence spans the Empire.

This fifth and final season of the show will arrive as a 3-disc set and contain, once again, a handful of bonus features, such as Behind-the-Scenes Featurettes and Cast Interviews.

In addition to the final season itself, PBS Distribution will also, on the same day, release Poldark: The Complete Collection—alas, on DVD only. The release will span 15 discs with over 42 hours of content, telling the entire Poldark saga that viewers have come to love.