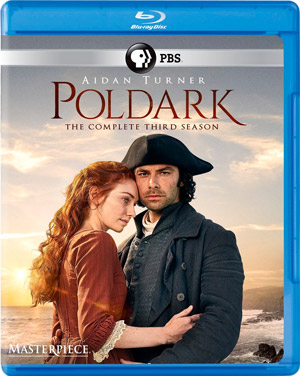 As the show is nearing its mid-season on television, PBS Distribution has also added a Blu-Ray Disc and DVD version of Poldark: The Complete Third Season to its line-up, scheduling the release for early November.

And right out of the gates, Poldark will be in a full gallop, as fresh doubts about the paternity of Elizabeth’s impending baby emerge, along with some consequential new characters, including Ellise Chappell as Elizabeth’s pretty cousin Morwenna. Hired as the governess for Elizabeth’s young son (by her previous marriage to Poldark’s cousin Francis), Morwenna is soon a pawn in George’s grand game to win political influence.

Morwenna would prefer to share company with Demelza’s strapping brother Drake, a lay minister played by Harry Richardson, but George intends her to marry the recently widowed Reverend Whitworth, portrayed with unctuous piety by Christian Brassington. Whitworth gives every indication of being a rank libertine, to the horror of the upright and innocent Morwenna. Meanwhile, George manages to abuse every privilege he accrues in his ruthless climb to power.

Also enlivening the new season are a mysterious plague of frogs, a thwarted famine, and Aunt Agatha’s eagerly anticipated one-hundredth birthday party, which has a catastrophic catch. But the most stirring action involves the French Revolution, which manages to ensnare one of the program’s main characters in its Reign of Terror, prompting Poldark’s most dangerous mission yet.

Perhaps even more perilous—at least for his psyche—is Ross’s cooling attitude toward Demelza. Reckless to a fault, he appears to be throwing it all away—a magistracy, a seat in Parliament, his lands, and even his red-haired beauty. What on earth could he be thinking?