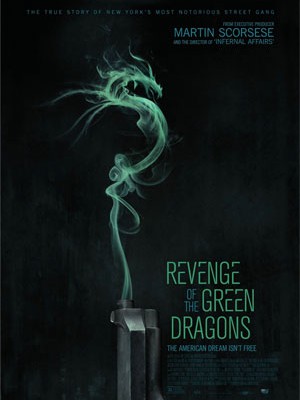 Lionsgate Home Entertainment has added the gritty crime thriller Revenge of the Green Dragons to its release line-up, bringing this powerhouse of a thriller from executive producer Martin Scorsese and acclaimed Hong Kong director Andrew Lau to Blu-Ray Disc and DVD in January.

In the film, two immigrant brothers join the Green Dragons gang. They quickly rise up the ranks and become notorious in the community, drawing the attention of the NYPD’s Detective Bloom. But when an ill-fated love affair pits one of the brothers against the gang’s leader, he sets out for revenge on the group.

The release will come complete with a Commentary Track by Director Andrew Lau and Writer/Director Andrew Loo. also included on the release are the Featurettes ”The Not So American Dream: The Cast,” “Stitches in Time: Costume Design,” and ”A Claustrophobic World: Production Design”.

In addition, the Blu-Ray version will also contain a selection of Deleted Scenes.

“Revenge of the Green Dragons” will chronicle New York’s most notorious street gang on January 13 and can be yours for $24.99 on Blu-Ray Disc or $19.98 on DVD.