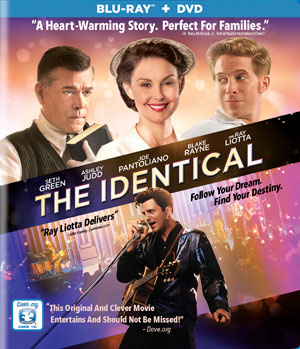 Cinedigm has just unveiled information about the upcoming release of the heartfelt rock’n roll tale The Identical, slated for release as a Blu-Ray/DVD Combo Pack and DVD in January.

“The Identical” follows twin brothers unknowingly separated at birth during the Great Depression, Drexel Hemsley and Ryan Wade (both portrayed by Blake Rayne). Drexel, raised by his birth parents, grows up to achieve rock-n-roll stardom twenty years later, and Ryan, adopted by a reverend and his wife, struggles to balance his love for music and pleasing his parents who believe he has been called on by God to become a preacher. Against his parents’ wishes, Ryan chases a musical career, embarking on an unpredictable journey where he eventually finds his stride, ironically enough, as a Drexel Hemsley impersonator, and uncovers his hidden family secret, leading him to question everything he’s ever believed about God, family and his own identity.

Ray Liotta, Ashley Judd and Seth Green also star in this redemptive coming-of-age story. The DVD version will also contain the Featurette ”The Music of The Identical” as well as the movie’s Theatrical Trailer.

The Blu-Ray/DVD Combo on the other hand will be packed with the Featurettes ”The Music of The Identical” and ”The Making of The Identical”, as well as Behind-the-Scenes Footage with Cast Commentary.

Zaxby’s Promotional Video is also included, as well as Deleted Scenes and the movie’s Theatrical Trailer.