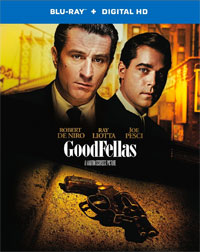 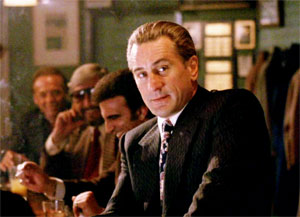 Martin Scorsese’s 1990 movie “GoodFellas” is without a doubt a true modern classic. It is one of those films that everyone has seen and one that everyone should see. It is dark, disturbing, violent and at the same time intriguing, charming and brimming with style. Well, after all, it IS a Martin Scorsese film. And it is a mobster movie, so it is what Scorsese is best known for and does best, to boot.

“GoodFellas” tells the story of Henry Hill (Ray Liotta) and his life among the mafia in New York. Growing up in a neighborhood were wiseguys rule, inevitably, Henry becomes entangled in the web of the mobsters at an early age, and as he reaches adulthood he’s a made man himself. The world seems good. Everything falls into place for the young man. The money is coming in in troves, the booze is flowing, the girls are willing and hot, and there’s always something to do and some scheme going on. But the more successful Henry and the mobsters around him become, the more they lose touch with reality, living by their own rules, believing they could bribe and take on just about anybody – including the American justice system. 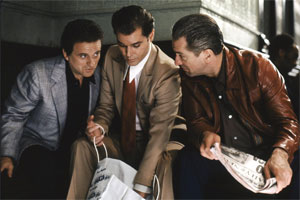 Well, as they say, the higher they go, the harder they fall, and as things spin out of control in Little Italy, Henry suddenly finds himself between a rock and a hard place. The more powerful his friends become, the more their character faults and personalities surface – and never for the better. Some of them turn into true psychopaths who take pleasure in hurting and killing people. The more blood, the better. And it ultimately becomes their downfall. Completely without restraint or common sense, they turn into raging lunatics destined for the inevitable fall.

Cast with actors like Robert DeNiro and Joe Pesci, alongside Ray Liotta as the central character, this film couldn’t have been any better. It is a masterpiece that sheds light on the underbelly of the mafia, not from a sensationalist standpoint, but from an emotional one, through the yes of someone who is in the midst of it all. Someone who realizes that things have gone to the dogs and who begins to have inhibitions and second thoughts about what he sees, questioning if this lifestyle is truly what he’s been aspiring to for all his life.

I have been very eager to take a look at this release of “GoodFellas,” mostly because past releases of the film on high definition have been mediocre at best. Fortunately, with this 25th Anniversary Edition, Warner Brothers Home Entertainment has finally taken heart and struck a brand new 4K transfer of the film, made sure it meets Scorsese’s own approval, and turned it into a new 1080p high transfer for this disc. The effect is instantly visible. 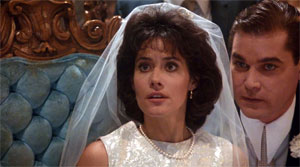 Gone are the flat and washed out colors of pervious incarnations. Gone are the weak shadows and black levels. Gone is the general lack of detail in the presentation. What we have here, is a wonderful remaster that finally does the film justice. The remaster also finally took care of the jittery registration problems that continually plagued previous transfers of the movie. Best of all, despite all the improvements, the film still has maintained its gritty look, which includes a bit of intentional grain throughout. I am glad to see Warner did not simply digitally scrub the entire transfer clean but instead made sure that the visual presentation is still firmly within the director’s original cinematic vocabulary, while at the same time giving it the cleanup it so desperately needed.

What we have here, at least, is an image that offers a rich color palette, reproducing Scorsese’s vintage look perfectly. Color accents finally find their focus, while shadows are deep and rich, giving the image solid depth. Best of all, the image revels in detail and texture, making it an entirely new experience to watch. I could not be happier!

The release features a DTS 5.1 HD Master Audio track that has also been remastered. While no significant changes are evident from previous incarnations, it is noticeable that the track feels tighter in places—perhaps the result of the lossless compression the Master Audio format employs, allowing more headroom for the track’s lower ends. Overall, the track still has its limitations, dictated by the original source materials, but it has a wider frequency response and makes good use of the surround channels throughout. Dialogues are always understandable and are never drowned out. 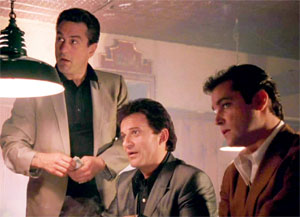 The release is packed with bonus materials, most of them found on the second disc of the set, except for two commentary tracks, which accompany the movie itself on the first disc. These are the commentary tracks found on previous releases of the movie, starting with the cast and crew commentary track with Martin Scorsese, Ray Liotta, Lorraine Bracco, Paul Sorvino, Frank Vincent and many others. Given the amount of people on the track, you will find a lot of valuable information and insight here on both the characters, the background and the production itself.

The second track features the real Henry Hill and former FBI agent Edward McDonald as they discuss the historical, cultural and ethical background of the film as well as the witness protection plan. Very good track with lots of interesting bits of information, and highly educational, too.

All the featurettes that were part of previous releases are also included here, in standard definition, covering various aspects of the movie. “Getting Made” is a fairly recent featurette with interviews by some of the film’s stars, notably Bracco, Liotta and co-writer Nicolas Pileggi. Also included is “Made Men: The GoodFellas Legacy,” and “The Workaday Gangster,” all of which offer additional insight into the characters and events of the movie and their real-life counterparts.

“Paper Is Cheaper Than Film” is a storyboard-to-film comparison that also shows viewers how much easier and affordable it is to plan out scenes in storyboards before actually shooting them. The movie’s theatrical trailer rounds out the release.

The full-length documentary “Public Enemies: The Golden Age Of The Gangster Film” is also included on the disc, featuring plenty of insight into the genre as a whole. The documentary seems a bit over-long and could have used a bit more focus, but it is interesting nonetheless, as it portrays the genre from its early to the modern days. 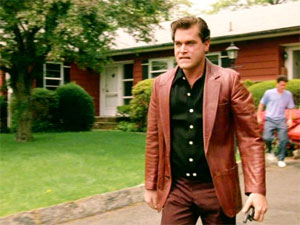 As a brand new bonus, this releases contains a 30-minute featurette called “Scorsese’s GoodFellas.” Created by director Brett Ratner, the featurette offers up more interviews with cast and crew members, but also does a good job at analyzing some of the workings of the movie in more detail. Check it out, for sure.

A letter from Martin Scorsese and the film’s theatrical trailer round out the bonus materials of the release. In addition to everything else, this Blu-Ray set also comes with a 36-page hardcover booklet featuring many on-set photos, along with an essay about the film’s history and influence.

At long last, we have a proper version of “GoodFellas” on Blu-Ray Disc. It’s certainly been overdue for many years, and Warner Brothers Home Entertainment is finally making sure to give fans what they wanted. No doubt, if you’re a fan of this film, this is the version you need to buy!