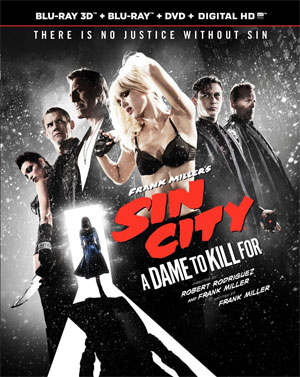 Anchor Bay Entertainment and The Weinstein Company have just announced the upcoming release of Frank Miller’s Sin City: A Dame to Kill on Blu-Ray Disc and DVD in November.

In the movie, scandal, murder, betrayal and mystery surround the lives of those swept up in a crime-filled underworld. Co-directors Robert Rodriguez and Frank Miller reunite to bring Miller’s visually stunning “Sin City” graphic novels back to the screen in the follow-up to the groundbreaking film, “Frank Miller’s Sin City” (2005). Weaving together two of Miller’s classic stories with new tales, the town’s most hard boiled citizens cross paths with some of its more reviled inhabitants.

In addition to the movie itself, the release will also include some cool bonus features, such as the never-before-seen Robert Rodriguez-approved ”The Movie In High-Speed Green Screen—All Green Screen Version”. In addition, you will find the Featurettes ”Makeup Effects Of Sin City With Greg Nicotero” and ”Stunts Of Sin City With Jeff Dashnaw” on the disc. The release will also offer up detailed Character Profiles.