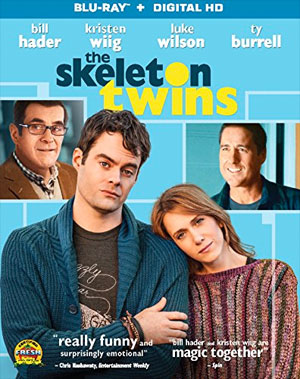 Lionsgate Home Entertainment has just announced the upcoming release of the critically acclaimed comedy The Skeleton Twins, scheduling a Blu-Ray and a DVD version for December.

The Skeleton Twins follows Maggie (Kristen Wiig) and Milo (Bill Hader), two estranged twins that are reunited after ten years of being apart.  With an irresistible mix of humor and heart and a stellar supporting cast, the film follows their unforgettable journey to reconnect, as they realize that the key to fixing their lives may just lie in repairing their relationship.

The Blu-Ray Disc and the DVD version of the film will include the same bonus materials, such as Outtakes and a Gag Reel.

In addition, the release features Deleted Scenes with Optional Commentary with Director/Co-Writer Craig Johnson, and the Making-of Featurette ”To Whom It May Concern” and the Featurette ”Sweet Moves”.