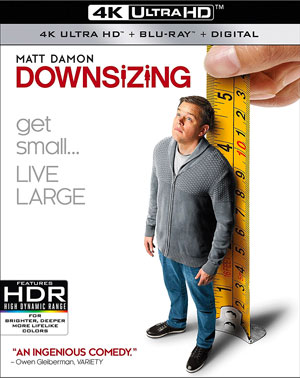 Paramount Home Entertainment has added the comedy Downsizing to its roster this week, scheduling a 4K UHD, Blu-Ray Disc and DVD version of the movie for release in March.

When scientists find a way to shrink humans to five inches tall, Paul Safranek (Matt Damon) and his wife Audrey (Kristen Wiig) decide to ditch their stressed-out lives in order to get small and live large in a luxurious downsized community.  Filled with life-changing adventures and endless possibilities, Leisureland offers more than riches, as Paul discovers a whole new world and realizes that we are meant for something bigger.

Aside from the feature film, the release will also contain a number of Featurettes, such as ”Working with Alexander,” “The Cast,” “A Visual Journey,” ”A Matter of Perspective,” “That Smile,” and ”A Global Concern.”