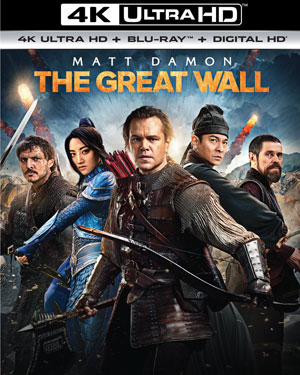 Universal Pictures Home Entertainment has just unveiled the upcoming release of The Great Wall, scheduling its release on 4K UHD, Blu-Ray Disc and DVD in late May.

Starring Matt Damon and directed by one of the most breathtaking visual stylists of our time, Zhang Yimou (Hero, House of Flying Daggers), The Great Wall tells the story of an elite force making a valiant stand for humanity on the world’s most iconic structure.

Featuring the movie with Dolby Atmos soundtrack, the release will also contain a solid number of bonus features, including a selection of Deleted and Extended Scenes, as well as a number of Featurettes. Among them, you will find the Interview Featurettes ”Matt Damon in China” and “Working with Director Zhang Yimou”, as well as a look at The Great Wall Visual Effects, Man vs. Monster and Weapons of War. Further, look for the Featurette ”Designing a Spectacular World”.