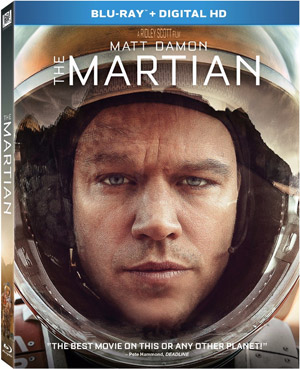 From legendary director Ridley Scott (Alien, Prometheus) comes a gripping tale of human strength and the will to survive. During a mission to Mars, American astronaut Mark Watney (played by Academy Award winner Matt Damon) is presumed dead and left behind. But Watney is still alive. Against all odds, he must find a way to contact Earth in the hope that scientists can devise a rescue plan to bring him home. Based on the best-selling novel by Andy Weir, “The Martian” provides a realistic glimpse into life in outer-space that will have you on the edge of your seat!

The Blu-Ray version will offer a solid number of bonus materials, consisting for the most part of a variety of Featurettes.

In ”Signal Acquired: Writing and Direction”, learn how the producers brought an acclaimed novel, a master director and a stellar cast together.

Then, watch Matt Damon and his ensemble of incredibly talented actors discuss their roles in the film in ”Occupy Mars: Casting and Costumes”.

Next up are 5 Theatrical In-World Pieces, called ”Ares III: Farewell,” “The Right Stuff,” “Ares: Our Greatest Adventure,” “Leave Your Mark” and ”Bring Him Home”.

”Ares III: Refocused” revisits the story seven years after the events of Ares III and invites you to take a deeper look at the true story behind Mark Watney’s daring rescue.

The release is rounded out by a Gag Reel and a Production Gallery.