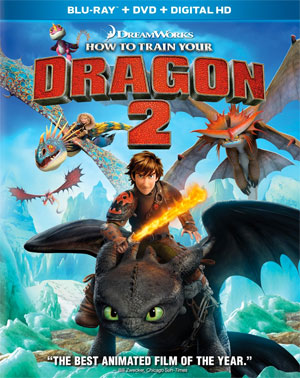 Twentieth Century Fox Home Entertainment has added the DreamWorks Animation movie How to Train Your Dragon 2 to its release line-up, bringing the film to Blu-Ray Disc and DVD in November.

The thrilling second chapter of the epic “How to Train Your Dragon” trilogy returns to the fantastical world of the heroic Viking Hiccup and his faithful dragon Toothless. The inseparable duo must protect the peace and save the future of men and dragons from the power-hungry Drago.

Also included is an Image Gallery and the movie’s Theatrical Trailer, as well as a collection Music Videos from your favorite DreamWorks Animation feature films.

The Blu-Ray version will include the same bonus materials, but further add to them with features, such as a Commentary Track by Simon Otto, Bonnie Arnold, Dean DeBlois, and Pierre-Olivier Vincent.

Also included is Drago’s War Machines, in which Gobber the Belch narrates an inside look at the fierce creatures and “high-tech” weapons used by Drago to expand his growing dragon army. In Berk’s Dragon World explore the massive stable created to house the dragons of Berk, along with other changes made on the island to promote harmonious living. Hiccup’s Inventions in Flight allow you to learn the secrets of how Hiccup and Toothless work together to form the ultimate high-flying team in this fascinating interactive tour.

The awesome adventure continues with a selection of Deleted and Extended Scenes, including action-packed footage you couldn’t see in theaters! Taking you behind the scenes is Where No One Goes: The Making of How To Train Your Dragon 2, in which Writer-Director Dean DeBlois and his team take you behind the scenes of creating the film’s eye-popping visual effects and epic story.

Catch the thrilling aerial action and exciting play-by-play commentary in Dragon Races as you cheer on your favorite riders in a spectacular dragon race!