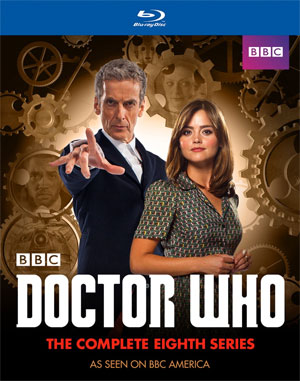 BBC America has just announced the upcoming release of Doctor Who: The Complete Eighth Season on DVD and Blu-Ray Disc in December.

The new era of Doctor Who starring Peter Capaldi delivered the highest rated season premiere ever on BBC America. In the feature-length premiere, the new Doctor crash-lands in Victorian London—please see our review for more details. As Clara (Jenna Coleman) struggles to recognize the man she thought she knew so well, killers are stalking the capital. A slaughterhouse restaurant and a buried spaceship lead the Doctor into a confrontation with a long forgotten foe… but how far is this new man ready to go to protect his friends?

The new season sees the Doctor and Clara encounter wonders and horrors. They meet a fleet of Daleks as they attempt to rescue a stranded ship of human survivors, face ranks of Cybermen stalking the Earth, go back in time and join Robin Hood in a fight with killer robots in Sherwood Forest, become bank robbers when they break into the deadliest bank in the cosmos, face a mummy on the Orient Express, discover a deadly horror dwelling on the Moon, and come to know the last man standing at the end of the Universe. And as Clara falls for handsome fellow teacher, Danny Pink (Samuel Anderson), can she keep her two extraordinary lives going?

Arriving as a 5-disc DVD version and as a 4-disc Blu-Ray version, both releases will feature all 12 episodes of the show’s most recent season, but will also be filled with bonus materials. Among them you will find Exclusive Footage from London Post-Premiere Q&A with Peter Capaldi, Jenna Coleman and Steven Moffat, as well as Exclusive Episode Commentaries for “Into the Dalek,” “Robot of Sherwood,” “The Caretaker,” and “Kill the Moon.”

Also, look for a Tour of the Tardis on the release, as well as the ”Doctor Who: Deep Breath Live Pre-Show & After Who Live”, hosted by comedian and Doctor Who superfan Chris Hardwick.

The Music Video “Don’t Stop Me Now” from the episode “Mummy on the Orient Express” by the Foxes is also included.