Out of al the doctors in the “Doctor Who” series, Matt Smith has long been my favorite one with his energetic hyper-activeness and youthful charm. Having resigned from the position, it is now time to welcome the next doctor to carry the franchise, Peter Capaldi. Just as the new season of the show is under way, BBC Entertainment has already brought the first episode “Depp Breath” to Blu-Ray to make it possible for everyone to meet and enjoy the twelfth doctor.

With a new body, a different face and a totally confused head, the doctor has just gone through his rejuvenation process when he lands the Tardis in Victorian London. Actually, the Tardis is being spat out by a T-Rex dinosaur who was accidentally transported through time as well.

While the doctor’s companion, Clara (Jenna Coleman) tries to come to terms with the fact how much the doctor has changed and how muddled his brain is, strange things happen around London. When the dinosaur suddenly bursts into flames, the trail leads to a series of comparable sudden combustions, but already, Clara and the doctor have become pawns in a much bigger game. 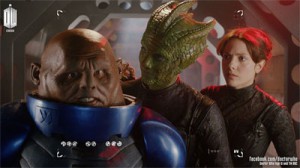 They are being played by a strange man who seems to be half man and half machine. But what are his plans, exactly, and why is he interested in the doctor in particular?

Naturally, when you watch “Deep Breath” for the first time, you don’t know what to expect. How is Peter Capaldi’s twelfth doctor going to pan out. Will you like it? Will you hate it? How does he compare to your favorite doctor of past, and I will be honest—I had my concerns too.

Fortunately for all of us, it turns out that Peter Capaldi is, in fact, a very capable doctor. Very different from Matt Smith or David Tennant, the doctor’s most recent incarnations, but in a good way, I should say. Capaldi has the necessary manic energy to carry the doctor off well and, truth be told, he has some really great and funny lines in the episode that instantly make him very likable. He isn’t as brash as David Tennant’s doctor was, and he doesn’t have the youthful playfulness that Matt smith brought to the part, but instead replaces it with something that is equally interesting—a certain “seniority” that stems from the actor’s own age. While, at first, I was worried that it may drag the doctor down, it turns out that combined with Capaldi’s body language, which is truly fun to behold, and his lines of deeper wisdom, the make the doctor charming, yet enigmatic, just as he should be in my opinion. Therefore, props to Peter Capaldi for pulling off a truly strong introduction that already has me hooked.

Jenna Coleman returns as Clara, as do the show’s staple characters, the Paternoster Gang, consisting of Madame Vastra, her wife Jenny Flint and Strax. The ensemble cast instantly roots the episode and gives fans something familiar to latch onto, while the doctor “recuperated.” 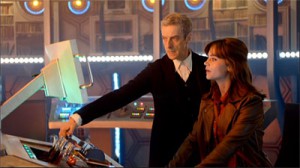 “Deep Breath” itself is a well-written episode. Since it is an introduction to the new doctor, a lot of it focuses on the frazzled relationship between the doctor and Clara and the way to mend it. As the doctor becomes more lucid, the show quickly falls into its familiar rhythm, and teases fans with cross-references to previous episodes and events, making sure that long-time followers will very quickly reach the necessary level of nostalgia to make the new doctor and the new season a success.

The story itself is a nice little mystery, almost Sherlockian in nature, with tidbits of the show’s real glory moments. For a first episode that is designed to set up premise and characters, I think this season is off to a great start, and I am eager to see the remaining elven episodes that are currently being broadcast.

The Blu-Ray transfer the BBC delivers on this disc is very good. There are a few banding artifacts in the dark underground scenes, but other than that, the transfer is wonderfully reproduced. Deep black dominate the image, giving it visual depth, while the rich colors bring to life the production with the lurid vividness that is often the show’s trademark.
The transfer is clean and free of any defects or blemishes and offers a wonderful amount of definition and brings out even the finest of detail. 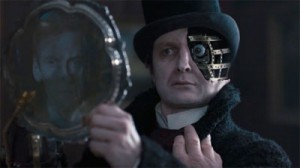 The feature episode is accompanied by a DTS 5.1 HD Master Audio track that nicely suits the show. It has a wide frequency response and a balanced mix that makes sure everything is as it should be.

A few extras are included on the release as well, such as the original television event that marked the unveiling of Peter Capaldi as the next doctor. Also included is a behind-the-scenes featurette with cast and crew interviews and footage from the production—including the first table read.

The featurette “The Real History of Science Fiction” is also included, as well as a prequel scene which serves as a teaser for the actual episode.

Already, “Deep Breath” shows signs of grandeur and foreshadows some exciting developments. If you were unable to catch this feature-length episode on TV, make sure to grab this disc and treat yourself to the next generation of “Doctor Who.” You won’t be disappointed.