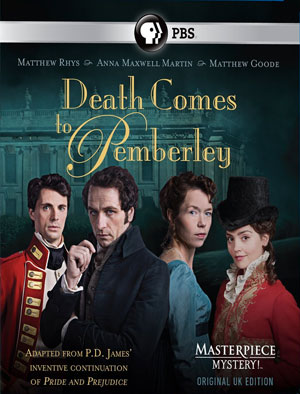 PBS Distribution is continuing its series of Masterpiece Mystery releases, bringing the brand-new Death Comes To Pemberley to Blu-Ray Disc and DVD this fall. Based on the crime novel by P.D. James, “Death Comes To Pemberley” asks the question, what happens after Elizabeth and Darcy tie the knot at the end of Jane Austen’s classic novel “Pride and Prejudice?”

“Pride and Prejudice” describes the courtship of Elizabeth Bennet, one of five unmarried sisters with practically no money. The eligible men in her orbit include Mr. Darcy, who is rich but aloof, and a charming army officer named Wickham. Wickham’s account of Darcy’s dishonorable behavior poisons minds against the affluent landowner. But in the end, it is Wickham who is the cad, since he runs away with the impressionable youngest Bennet girl, Lydia. Darcy proves to be a man of integrity, and his proposal to Elizabeth is eventually accepted.

“Death Comes To Pemberley” opens six years after these events with an impending ball at Pemberley, the palatial estate where Elizabeth (Anna Maxwell Martin) and Darcy (Matthew Rhys) make their home with their young son, Fitzwilliam. Many friends and relatives are invited. However, Wickham (Matthew Goode) and Lydia (Jenna Coleman) are not, owing to Wickham’s past disgraceful conduct with ladies.

But that doesn’t stop the dashing officer from heeding Lydia’s appeal to crash the party, and they set off by coach with Wickham’s friend Captain Denny (Tom Canton), who has something to discuss with his fellow soldier. Hours later, the coach arrives at Pemberley at breakneck speed and with an hysterical Lydia inside. All that’s certain is that neither officer is in the vehicle.

While Elizabeth calms Lydia and their distraught mother, Mrs. Bennet (Rebecca Front), a search party sets out, including Darcy, Mr. Bennet (James Fleet), and Darcy’s cousin Colonel Fitzwilliam (Tom Ward). What they find leads to a shocking murder charge and a thrilling trial. The investigation is conducted by a hereditary enemy of the Darcy family, Sir Selwyn Hardcastle (Trevor Eve). Revenge, mysterious paternity, and a ghost all figure in the ensuing plot, which would have kept Jane Austen on the edge of her Windsor chair.