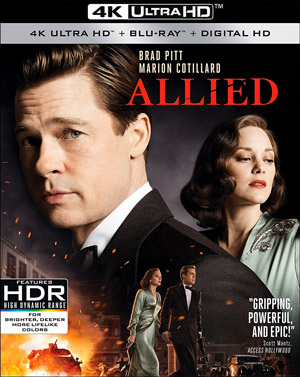 Brad Pitt and Marion Cotillard star as Max Vatan and Marianne Beauséjour, two of the world’s deadliest spies, who fall in love while undercover on a top-secret mission and marry during World War II.  But when Max learns his wife may be secretly conspiring with the enemy, he has only 72 hours to prove her innocence and save his family before he must do the unthinkable.

On DVD, the movie will be a bare-bones affair, featuring only the movie itself without any bonus features.

The Blu-Ray and 4K UHD versions, on the other hand, will be stuffed with additional goodies, in the form of a series of Featurettes, such as ”Story of Allied,” “From Stages to the Sahara: The Production Design of Allied,” “Through the Lens: Directing with Robert Zemeckis,” “A Stitch in Time: The Costumes of Allied,” “‘Til Death Do Us Part: Max and Marianne,” “Guys and Gals: The Ensemble Cast,” “Lights, Pixels, ACTION! The Visual Effects of Allied,” “Behind the Wheel: The Vehicles of Allied,” “Locked and Loaded: The Weapons of Allied”, and ”That Swingin’ Sound: The Music of Allied”.

Both versions with feature DTS HD 5.1 Master Audio tracks for the feature presentation.