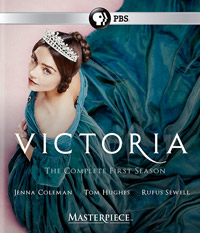 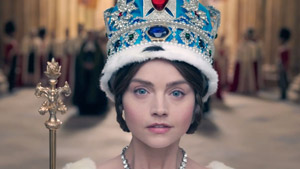 When it comes to high-quality television entertainment, no one beats the British, hands down. Often drawing from their own, incredibly rich history, the Masterpiece productions that PBS airs and publishes are among the best things to hit television. Naturally, I was extremely eager to take a closer look at Victoria, when PBS Home Entertainment dropped the Blu-Ray Disc in my lap, and before I go much further, I have to say right away that this is a top notch production, even by PBS Masterpiece standards. And that is saying something.

In June of 1837, King William IV died and, at the age of 18, his grand-daughter Victoria (Jenna Coleman) ascended to the throne of Britain. Because of her young age and inexperience, immediately, everyone in her family and the political establishment is trying to shape the young monarch to their benefit. But Victoria is headstrong and smart, seeing through much of the manipulation. Instead, she leans on Prime Minister Lord Melbourne (Rufus Sewell) for advice and help, building a very deep relationship of trust and friendship with him that serves her very well. 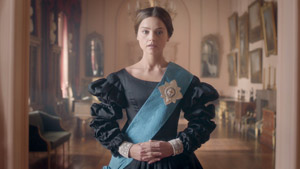 But the pressure grows from all around. First people try to diminish her and remove her from the throne, then the establishment calls for her to get married despite the fact that she has no desire to do so, and, of course, the queen needs an heir… Quickly learning the ways of manipulation and diplomacy, Victoria surprises her opponents with bold decisions and manages to get her way with deliberate, tactical moves. While defying tradition does not make her friends in the Tory party, she does earn everyone’s respect nonetheless.

Victoria is smart and attentive. She is curious about how people feel, and what their problems are. While she cannot address the social issues of the time period on a large scale, she does try to do right by her people whenever she can and steadily builds a reputation for herself.

Though she had no intentions to get married, Victoria falls in love with Prince Albert (Tom Hughes), her cousin from her mother’s side. While seemingly on opposite ends of the spectrum in terms of their personalities, the two forge an incredibly strong bond and soon decide to get married. 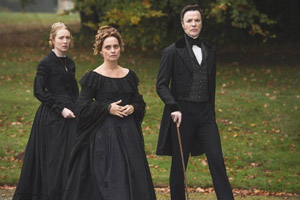 Following the wedding, however, the relationship becomes strained, as Victoria is the official monarch of the country, and Albert, the German intruder in many people’s eyes, feels sidelined, useless and without aim. Often relegated to the side and deliberately overlooked in the court etiquette, he desperately tries to earn his place next to the queen. He finds his vocation in the fight against slavery and manages to impress not only his friends but also those who had previously looked down on him. The newfound respect permeates public and political circles and all at once, Albert finds his own footing, just when Victoria becomes pregnant.

I am a great admirer of PBS Masterpiece series. All their British programming is so rich and captivating, and it always strikes a very different tone than American entertainment. It probably has to do with the rich history and heritage Britain can pull from, along with the magnificent, authentic locations, that allows these television productions to revel in these dramatic period pieces like no one else can. With that in mind, when Britain decides to tackle one of its greatest monarchs in a television series, clearly, the stakes are very high. To make a long story short, however, I loved every minute of it. So much so that I think Victoria will become the next benchmark for all PBS Masterpiece shows.

I’ve never been much of a fan of Jenna Coleman when she played Clara on Doctor Who, in these past seasons. Her character never appealed to me that much and I’ve always found her acting somewhat overly dramatic. As if she was trying too hard. It’s not surprising, considering the reputation of the show and the huge shoes she had to fill when she replaced absolute fan favorite Karen Gillan as the Doctor’s companion.

So, it was with some trepidation that I approached Victoria, but Coleman had me on the hook from the first moment. Truly had me impressed. Her portrayal of Victoria is intimate and so incredibly natural that it becomes personal and gets viewers to instantly connect. There is never a moment of over-acting or false pathos. If anything, Coleman’s portrayal of Victoria is a wonderful example of almost understated perfection, where every little gesture and emotion seems so natural that it just becomes the character. She could not have picked a better part for herself and I could not imagine for the show to find a better actress to embody this great character. 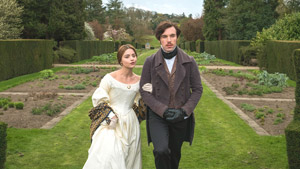 Surrounded by a great supporting cast, Coleman gives her best, along with Rufus Sewell who plays her friend and mentor, and as expected he is the perfect counterpart to Coleman’s performance. Controlled, as always, Sewell is both likable and cultured without appearing stiff, as he helps guide Victoria’s reign. Tom Hughes, as Albert, is also a wonderful addition, giving the character the kind of intensity that is necessary to portray the character’s constant struggle on the inside, as well as his almost stoic personality on the outside.

The transfer on this Blu-Ray release is magnificent and brings to life every bit of the impressive production. From the beautiful interiors sets of Kensington and Buckingham Palace, to the lush outdoor shots, the image always revels in detail and the 1080p high definition transfer make sure to capture and reproduce every little bit of it. Colors are incredibly rich and create a true feast as costumes and et decorations dazzle the eyes. Not a hint of compression artifact is evident anywhere on this release and with deep black levels, the transfer also makes sure the image has solid visual depth without breaking up shadow detail. Glorious is the word that comes to mind. 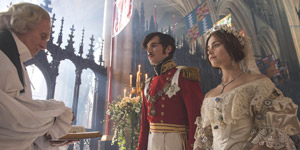 Victoria arrives as a 3-disc Blu-Ray set that contains all 8 episodes that make up the show’s first season as well as a few bonus features. Among those supplements you will find short interview segments, along with a tour of the Buckingham Palace set and a look at some of the CGI effects that were used to bring the London of these mid-1800s to life.

As I mentioned before, I loved every minute of Victoria and a cannot wait to see the next season, though the wait will be desperately long. Perfectly balanced, perfectly paced, perfectly cast, perfectly produced, this show is a magnificent journey back in time to revisit history on a very personal and intimate level. Seeing one of Britain’s greatest monarch grow into her own this way is simply a magnificent achievement and considering Victoria’s enormous 62-year reign, we may have many more season to look forward to.