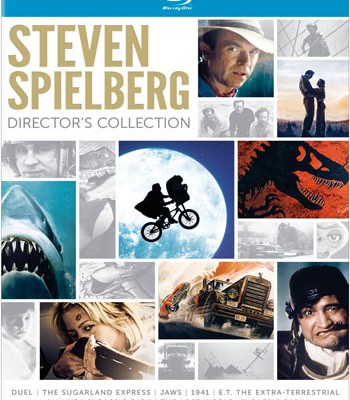 Scheduling it for release in October, Universal Home Entertainment is preparing an 8-Disc Blu-Ray and DVD box set to celebrate Steven Spielberg’s work.

Steven Spielberg is one of the most prolific directors in motion picture history. Spanning over 40 years, Steven’s career began as a teenager when he made his way onto the Universal backlot and befriended studio executives. His passion and talent quickly developed, allowing him to direct an unprecedented number of blockbuster films. The Steven Spielberg Director’s Collection showcases a selection of the Academy Award winner’s unforgettable movies filmed for Universal, including his very first TV feature, Duel, and his first theatrical release, The Sugarland Express, and blockbusters such as 1941, Jaws, E.T. The Extra-Terrestrial, Jurassic Park and Jurassic Park: The Lost World.

The Sugarland Express will feature high definition video and a English DTS-HD Master Audio 2.0 Mono track, and will only come with the Theatrical Trailer as a bonus.

Jaws will feature a DTS-HD Master Audio 7.1 track and will come with the same extras as the previous Blu-Ray release, namely the Featurettes ”The Making of Jaws,” “The Shark Is Still Working: The Impact & Legacy of Jaws,” “Jaws: The Restoration,” “From the Set,” “Marketing Jaws” and ”Jaws Phenomenon”. In addition you will find Deleted Scenes and Outtakes on the disc, as well as Production Photos and the movie’s Theatrical Trailer.

Next on the list is the comedy 1941, coming with a DTS 5.1 HD Master Audio track, The Making of 1941 as well as well as Production Photographs and Theatrical Trailers.

E.T. The Extra-Terrestrial comes with a DTS 7.1 HD Master Audio Track and features a number of Featurettes, suchas ”Steven Spielberg & E.T.,” “The E.T. Journals,” “A Look Back,” “The Evolution and Creation of E.T.,” “The E.T. Reunion,” “The Music of E.T. : A Discussion with John Williams,” “The 20th Anniversary Premiere,” as well as Designs, Photographs and Marketing, Theatrical Trailer and a Special Olympics TV Spot.

Always features a DTS 5.1 HD Master Audio Track and will contain only the movie’s Theatrical Trailer as an extra. 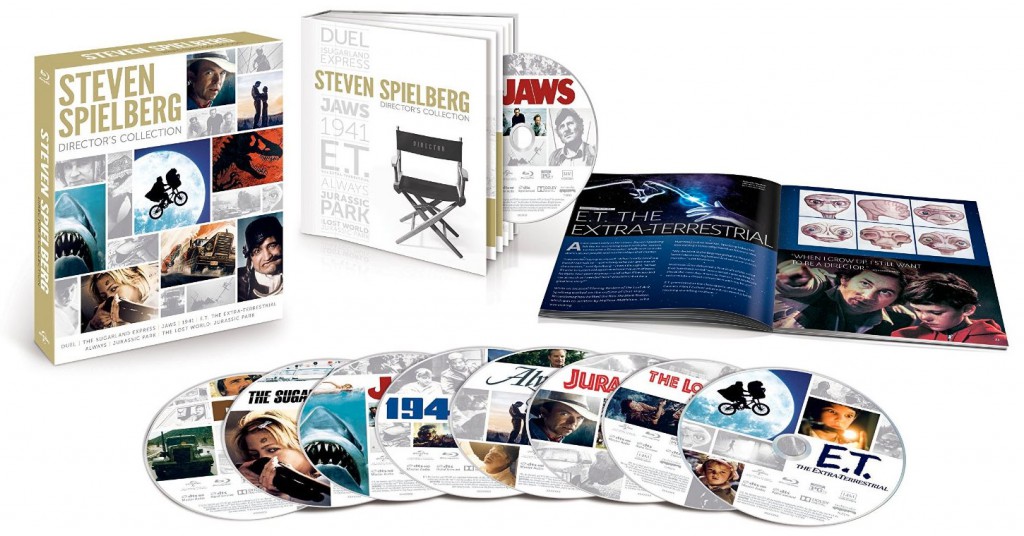 The Jurassic Park Phenomenon: A Discussion with Author Michael Crichton is also included, as well as The Compie Dance Number: Thank You Steven Spielberg from ILM and ILM & The Lost World: Before and After the Visual Effects.

The disc is rounded out by Production Archives: Production Photographs, Illustrations and Conceptual Drawings, Models, The World of Jurassic Park, The Magic of ILM, Posters and Toys and the Theatrical Trailer.

Each of the films comes in its own DigiBook packaging in the Collection. The “Steven Spielberg Director’s Collection” will be available on October 14 with a sticker price of $199.98 on Blu-Ray and $119.98 on DVD.