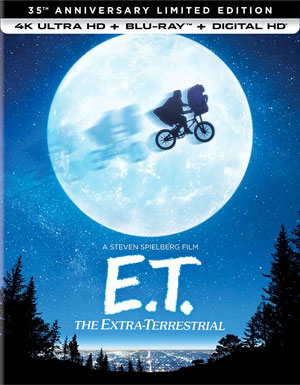 Universal Pictures Home Entertainment has just announced details about an upcoming 35th Anniversary Gift Set of E.T. The Extra-Terrestrial to be released on 4K UHD and Blu-Ray Disc this fall.

In 1982, acclaimed director Steven Spielberg created iconic movie magic with his classic film, E.T. The Extra-Terrestrial, the unforgettable and emotional adventure of an adorable alien lost on Earth and the lonely boy who befriends him. Winner of four Academy Awards®, including Best Music, E.T. The Extra-Terrestrial has become a cinematic touchstone for generations of moviegoers and one of the most beloved films of all time.

The 35th Anniversary Limited Edition the studio is preparing features premium packaging, includes a re-mastered CD Soundtrack of the original Grammy Award®-winning album, is packed with over three hours of bonus features and includes a Collector’s Booklet with behind-the-scenes stories and rare images from the archives.

Among the bonus features, you will find The E.T. Journals, retracing the day-to-day experience of creating E.T from behind-the-scenes footage shot by Academy Award®-winning cinematographer John Toll.
It also comes with Steven Spielberg & E.T., an interview with Steven Spielberg, as he reflects back on the film and discusses his experience working with the actors, as well as his overall and current perspective on E.T.
The Music of E.T offers up interviews and footage focused on the long-standing relationship between John Williams and Steven Spielberg.
In addition, there will be featurettes on the Designs, Photographs and Marketing of E.T, the E.T. Designs by Production Illustrator Ed Verreaux and E.T. Designs by Carlo Rambaldi, along with Spaceship Designs by Ralph McQuarrie and Designs by Production Illustrator Ed Verreaux.

Production Photographs, Deleted SCenes and the Theatrical Trailer will also be included, as well as Marketing E.T.: A Look Back offering a special insider’s look into the making of E.T. featuring interviews with Steven Spielberg, the cast, and others intimately involved with the film.
Also look for The E.T. Reunion in which the cast and filmmaker reunite to discuss their thoughts on the impact of the film, as well as The 20th Anniversary Premiere during which composer John Williams played the score of E.T. live at the Shrine Auditorium for the re-release premiere of E.T.

This limited edition of E.T. The Extra-Terrestrial will arrive in stores on September 12 on 4K UHD and Blu-Ray Disc for $49.98. 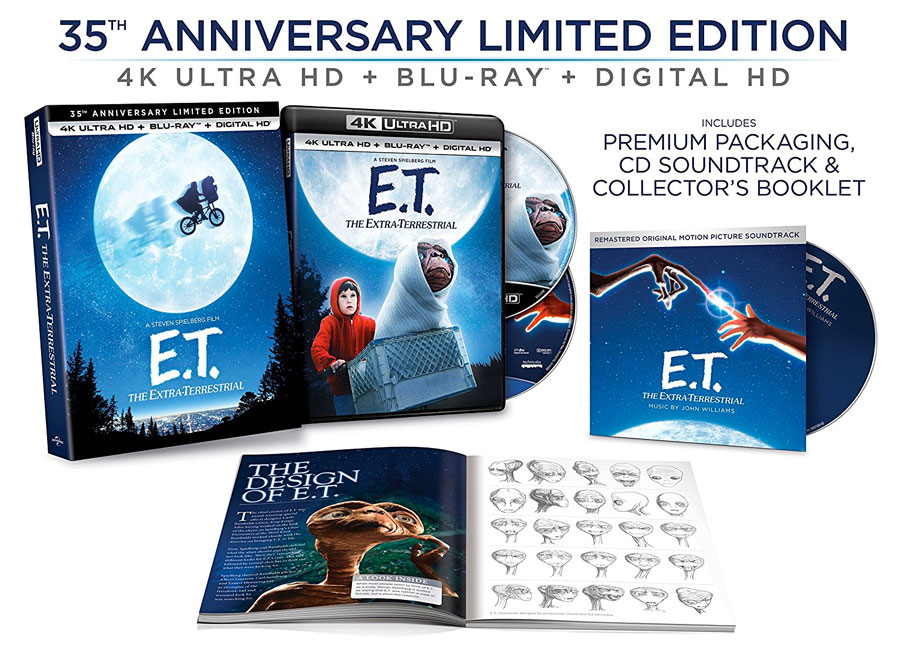