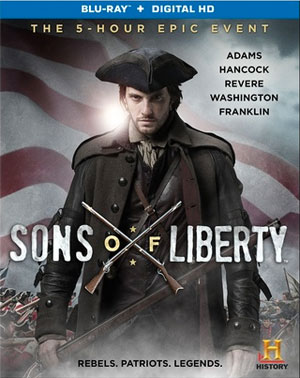 Lionsgate Home Entertainment has announced the upcoming release of the History’ Channel’s action-packed miniseries Sons of Liberty, bringing the show to Blu-Ray Disc and DVD in May.

As riots consume the streets of Boston, a dangerous game plays out between a British governor and ringleader Sam Adams, which escalates to extreme measures—street brawls, black market dealings, espionage and murder. A sizzling, romantic affair percolates against a backdrop of rising civil unrest, the infamous Boston Tea Party and Paul Revere’s legendary ride. From the Battle of Lexington, a clash between the dedicated colonists and the superior British Army ensues, and the colonies join forces as a single, united country in the most epic revolution of our time.