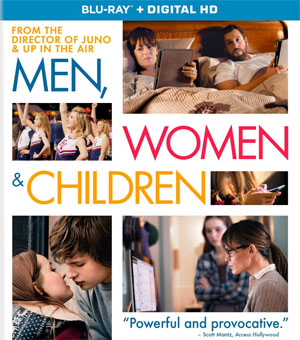 Paramount Home Entertainment has plans to bring Men, Women & Children to your home on Blu-Ray Disc and DVD in December.

Directed by Jason Reitman, and starring Adam Sandler and Jennifer Garner, “Men, Women & Children” tells the story of high school teenagers and their parents who attempt to navigate their complex relationships in an era defined by social media, online exchanges, and instant gratification.  Discover how little you know about the people you know in this riveting film.

The DVD version will arrive as a barebones single-disc DVD with an anamorphic widescreen presentation of the movie, complemented by a Dolby Digital 5.1 audio track. No bonus materials will be included on the disc.

The Blu-Ray version fares somewhat better, featuring a 1080p high def presentation with DTS 5.1 HD Master Audio. Among the supplements on the release you will find the Featurette ”Virtual Intimacy”, in which the cast and director discuss the effects of technology and social media on our lives and relationships.
Also included is Seamless Interface, a behind-the-scenes look at how the digital world of the film was created. The releases is rounded out by Deleted Scenes, including a never-before-seen storyline.