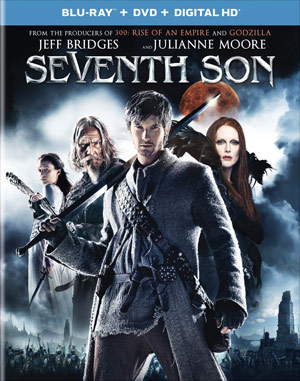 Universal Pictures Home Entertainment has added the fantasy film Seventh son to its line-up, scheduling the film for release on Blu-Ray Disc and DVD in May.

In a time of enchantments when legends and magic collide, the sole remaining warrior of a mystical order (Jeff Bridges) travels to find a prophesized hero born with incredible powers, the last Seventh Son (Ben Barnes). Torn from his quiet life as a farmhand, the unlikely young hero embarks on a daring adventure with his battle-hardened mentor to vanquish a dark queen (Julianne Moore) and the army of supernatural assassins she has dispatched against their kingdom.

The Blu-Ray version will contain all of the above bonus features, but will further expand on them by also delivering a selection of Deleted and Alternate Scenes and the Featurette ” The Making of Seventh Son: Forging a Medieval Realm.