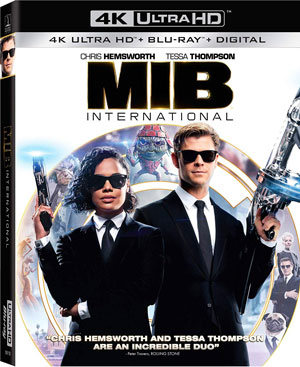 Sony Pictures Home Entertainment has just unveiled details about the upcoming release of the latest installment in the franchise, Men in Black: International, scheduling the release of the movie on 4K UHD, Blu-Ray Disc and DVD in September.

The Men in Black have always protected the Earth from the scum of the universe. In this new adventure, they tackle their biggest, most global threat to date: a mole in the Men in Black organization.

Naturally, the release will also contain a host of bonus features, including the following exclusives on the 4K UHD version—Deleted Scenes and the Featurettes Alien-cestry.com allowing you to trace your very own alien roots and Neuralyzer: Like It Never Even Happened, as NOT seen on Alien TV, this clip shows you how to order now to get your very own Neuralyzer and erase life’s embarrassing moments like a pro.

All versions, will include a Gag Reel and the Featurettes New Recruits, Classic Suits, showcasing the delightful chemistry between Tessa Thompson and Chris Hemsworth and supported by icons like Emma Thompson and Liam Neeson,Let’s Do This! Inside the Action & Stunts taking you behind the scenes with the stunt team to see how they pulled off the action scenes in the movie.
Look Right Here: Gadgets, Weapons, & Rides is a look at gadgets, from the iconic Neuralyzer to a tricked out Jag, check out the amazing arsenal of gadgets, weapons and vehicles, while Expanding the Universe of MIB explores the international locations, aliens and more as the universe expands.
Everyone’s favorite pug and pawn join together in Frank & Pawny’s Peanut Gallery to watch a few key scenes and share their thoughts, while in Les Twins Leave It on the Floor, dance sensations Les Twins show off their signature style and how they devised their alien moves.
Join Frank the Pug for In Case You’ve Been Neuralyzed: MIB Recap, a rapid-fire recap of the MIB franchise, while The MIB Meet the NBA wonders if, with talent like this, certain NBA stars must be super-human.