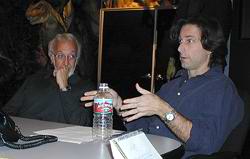 Stan Winston and John Rosengrant talk about ?their creations

Universal Home Video obviously has great hopes for the upcoming release of “Jurassic Park 3.” The movie grossed almost $200 million at the domestic box office earlier this summer and is just as heavy a hitter as the previous two parts of the series. In order to promote the upcoming DVD release of the film, Universal Home Video invited us to a visit at Stan Winston Studios, and as most of you movie buffs know, Stan Winston is the authority in the field of animatronics, robotics and creature effects. His work spans almost 30 years since his first contribution to the TV production “Gargoyles,” and with his continuous involvement in the Jurassic Park series, he has literally redefined the way we look at dinosaurs. Beyond these two extremes lie countless creatures, such as the Terminator, the Predator, the Alien, the Gorillas from “Instinct,” the lions from “The Ghost and the Darkness,” Edward Scissorhands, The Penguin and the penguins from “Batman Returns,” the Thing, and many, many other memorable creatures and monsters—too many in fact to recount them all.

Nestled in an unsuspecting warehouse just outside Hollywood, Stan Winston Studios is basically a huge workshop in which some of the world’s most talented artists, sculptors and animatronic engineers put together illusions that baffle and fool the eye.

“I am in awe every time I walk into this room, just as you are now,” an energetic Stan Winston says when meeting me and a number of other journalists in the company’s conference room, which is filled with life-size creature exhibits from the movies he worked on. From one corner a T-Rex is staring at visitors, while the Terminator lets you look down the barrel of his gun. A beautiful Raptor is eyeing you as you take a seat and a gorgeous “Small Soldiers” diorama reminds us of some truly great movie highlights. But that’s not all, above it all tower creatures and monsters, filling up every available inch of the room, all of them so realistic-looking that it can in fact become frightening.

Stan Winston and his special effects supervisor John Rosengrant spend all afternoon telling fascinating stories about the movies they made, pulling out staggering anecdotes about the Jurassic Park films. Winston is quick to admit that by the beginning of the projects, oftentimes, he has no idea how to achieve the effects he’s asked to do, but with his talented and highly skilled crew of engineers, artists and craftsmen, the studio always manages to pull of results that are beyond 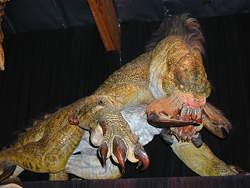 From “The Relic,” only one of the many creatures on display at Stan Winston Studios

expectation. We all remember the first time we saw the T-Rex come onto the scene in Jurassic Park—controlled by John Rosengrant—and the moment has made movie history. It wasn’t without problems, however as the two point out. Despite Winston’s request to keep the 8 ton model dry at all times, director Steven Spielberg placed it in the pouring rain, causing all sorts of problems. The latex skin slowly soaked up the water and became increasingly heavier over time, throwing off the finely tuned and balanced animatronics that are inside. As a result the crew had to constantly re-calibrate the model in order to achieve the super-smooth and realistic performance they were looking for.

Stan Winston is all about performances, which somehow sets him apart from many other special effects people. He views all his creatures as actors and not so much as props. “If you give an actor something to re-act to, you will get a performance. Let a great actor play off another great actor and you get great performances,” he says. “That’s also the reason why fully computer generated actors will never become a reality. We want to see Al Pacino act, not some animation!” With that in mind, he always tries to give his creatures the ability and flexibility to act and react on the set depending on what a scene needs to make sure the other actors who are also in the scene have something to work with.  Does that mean he dislikes computer-generated images? Quite the opposite, actually. Early on he embraced the technology—in fact Stan Winston is one of the co-founders of “Digital Domain”—and uses it to extend the possibilities and abilities of his own creatures. “We can now use rod-puppets and have the rods all over the place without worrying about them. We simply remove them in the computer later.” That of course gives the puppeteers a larger degree of freedom, which helps to create more realistic performances. 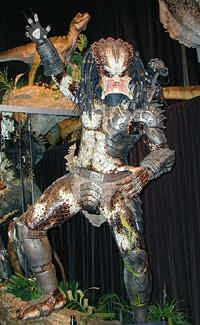 The Predator on his best behavior

In other instances, things get even more dramatic. One particular scene in Jurassic Park III involves the use of a Raptor model as well as computer-generated ones. The effect and illusion is perfect and unless you know how it is achieved, you will never be able to tell the difference. “There are many things we did in this film that were impossible to do in the first Jurassic Park.” John Rosengrant points out. “With every film we took things one step further.”

In “Jurassic Park,” the team basically tried to create a life-size T-Rex that moves realistically without the robotic feel of a theme park attraction. It was one of the key achievements in the film, together with the seamless mix of Raptor models and computer generated ones. In the second film, the challenge was to create models that were more mobile. The result are rampaging T-Rexes and Raptors that are more agile. In the third film one of the challenges was to create an underwater attack of the Spinosaurus among others. With every film, the team tried to give the models a bigger range of capabilities that would allow for better performances.

About 50% of the dinosaurs in “Jurassic Park 3” are computer generated while the rest are hand- or radio-controlled Stan Winston creatures. Computer animation is mostly applied only in moments when the practical models can’t be used, or to enhance the performance. By no means does Winston see either approach as the end-all-be-all-solution, and makes sure they complement each other to create the best results possible.

Following the extensive conversation with Stan Winston and John Rosengrant, the two allowed us a close-up look behind the scenes, taking us into the workshops, where a “life” Raptor was already waiting. If you saw the movies, you think they are cool, but if you have seen one of these creatures perform in real life, you will be awestruck. At first sight, the Raptor looked and behaved like a life animal. There, I said it. The mannerisms, the way it cocked its head, the way the eye is fixating on you and blinks quickly, the way the neck is bending, is simply breathtaking, and when I touched the skin of the animatronic model, I almost expected it to be warm. No wonder they are utterly convincing on film, and Stan Winston goes even further, pointing out that hey can actually scare. 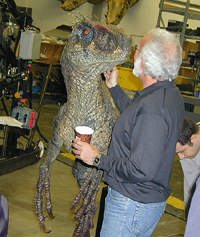 “In many scenes in the Jurassic Park movies, when you see actors appear really scared, you can be sure they ARE scared. When the raptor was exploring Tea Leoni in “Jurassic Park 3,” blowing her hair, pushing her head around, she was really scared, because that thing can hurt her. When the T-Rexes take apart the jeep in “Jurassic Park: The Lost World,” the actor was really scared!” Easy to image when you think that there are two 9-ton robots ripping on metal only inches away from you, each of them easily capable of crushing every single bone in your body in a fraction of a second. For Winston and his team, it is all part of the performance that makes the result so realistic, and I agree, if an actor would have to pretend in front of a bluescreen for a computer animation, the result would be nowhere as convincing.

But it’s not only the big special effects that make up Stan Winston’s body of work and he’s most proud the work his studio did on “Instinct.” “Are you aware that there is not a single frame of real gorilla in that movie?” he asks? That’s right. All the gorillas in the film are animatronic Stan Winston creatures. While viewing a reel of effects the studio did, Winston points out a shot from “Interview With The Vampire” and says, “That’s a robot.” 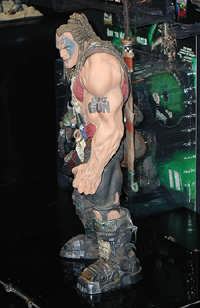 One of the action figures, forthcoming from Stan Winston Studios

It is the scene in which Claudia slits Lestat’s throat halfway through the movie, killing the Laudanum-poisoned vampire—or so she thought. What you see dying on the screen there is a robot. The shot required a transformation that wasn’t possible using Tom Cruise, the real actor. As he dies, we see his face change and his lips pull back to reveal the teeth, distorting the face to a deadly grimace. “In the end, what you see is not a robot, you see Lestat die!” Winston points out, obviously proud that this is one of the most invisible—and therefore most effective—effects ever did.

Stan Winston Studios is also expanding in other territories now and many fans will be pleased to hear that the studio is currently preparing the launch of Stan Winston action figures. Beautifully crafted action figures that are original and tremendously detailed. Each one is designed from scratch and part of one of three lines that the studio is releasing. Wait until you see these and you will forget your McFarlane toys.

The dedication and enthusiasm that Stan Winston exubrates is infectious, certainly helping to make this studio such a unique place. Winston himself doesn’t really take credit—“I’m not doing anything,” he says with a laugh—when he guides and directs a group of incredibly talented people, and I tend to agree when he says that the people working in the movies these days are the Michelangelo’s of the 20th and 21st century. “In the past, the best artists were working for the church, painting cathedral ceilings or sculpting busts. Today they work in movies!” he exclaims, and I tend to agree. If you take a look at one of these models he has created you will quickly realize that each one of them is a unique piece of art. Priceless in its own way.