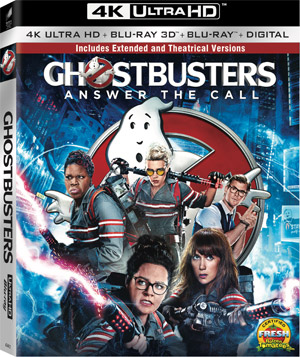 Sony Pictures Home Entertainment added the new Ghostbusters to its release roster, offering up an Extended Version of the movie with more than 15 minutes of additional footage as a 4k Ultra-HD, Blu-Ray 3D, Blu-Ray and DVD version in October.

The franchise makes its long-awaited return with Director Paul Feig’s unique and hilarious take on the classic supernatural comedy, led by the freshest minds in comedy today, Melissa McCarthy, Kristen Wiig, Kate McKinnon, Leslie Jones and Chris Hemsworth.  Together they team up to save Manhattan from a sudden invasion of spirits, spooks and slime that engulfs the city.

The DVD version will include the Making-of Featurettes “Meet the Team,” “Visual Effects: 30 Years Later” and “Slime Time”, along with Filmmaker Commentaries, Jokes A Plenty: Free for All and a Photo Gallery.

The high definition versions will all feature the movie’s theatrical cut as well as the new extended cut, along with all the bonus features mentioned above. In addition, however, these versions will also contain Gag Reels and Deleted Scenes, as well as a selection of Alternate Scenes. Further, you will find two more Featurettes on the release, called ”Chris Hemsworth is ‘Kevin’” and “The Ghosts of Ghostbusters”