Blake Edwards’ 1965 movie “The Great Race” will always have a special place in my heart. I loved the movie since the first time I saw it when I was a child, and its quirky characters, the locales and of course the zany comedy all appeal to me like few movies do. As part of the “Warner Achive, ” Warner Home Entertainment has now made

the movie available on Blu-Ray as well, making it a must-see for this reviewer.

The Great Leslie (Tony Curtis) is succeeding in anything he does. He is an inventor and showman and manages to always catch the limelight. On the other end of the spectrum is Professor Fate (Jack Lemmon) with his assistant Max (Peter Falk), who constantly fails in his attempts to capture the spotlight with his flawed inventions.

One day, the Great Leslie has the idea to initiate a race around the world, from New York to Paris, in order to promote a new car he helped design. Immediately Professor Fate takes up the challenge and enters the race along with many other competitors. But he doesn’t plan to play fair by any means. He just wants to beat the Great Leslie for once… at any cost. What follows is a riotous and charming comedy tour around the world that takes the viewer from New York to the Mid-West and the Arctic, all the way to strange European kingdoms and finally, Paris.

Much of the movie’s flair comes from the beautifully lighthearted atmosphere it creates. Jovial at times, funny and silly at others, the movie is full with great moments, and plays on all of Blake Edwards’ trademarks. Whether it is the homage to the great Laurel and Hardy—which is perfectly played out by Lemmon and Falk throughout the film—or the innocence of the romantic encounter between Tony Curtis and Natalie Wood, everything is harmonious and nicely crafted together. 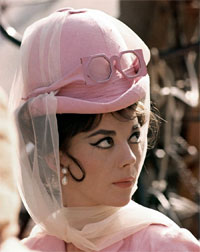 In the second half of the film we are then confronted with an entirely new subplot that could almost have been a movie of its own, and yet, it seamlessly integrates with the rest of the film.

“Warner Archive,” as you may know, is Warner’s way of releasing deep catalog titles that usually do not have a large fan following. Instead of producing masses of discs and shipping them to retailers where they may end up discounted, with the “Warner Archives” the studio has on-demand services that creates the product the moment you order it through their website and ships it straight to you, depending on your order size, even with free shipping. To make things even easier. Online stores like Amazon even stock limited quantities of Warner Archive titles to make the turn-around even faster and access to the titles easier for you.

A side-effect of this is that, traditionally, the titles in the Warner Archive are bare-bones releases without any bells and whistles, featuring very simple menus. Completely streamlined products that can be produced on the drop of a coin.

“The Great Race” is the first Blu-Ray disc I have checked out from the Warner Archive—I had previously only seen DVD titles—and I was instantly impressed. Not only does the release feature a DTS 5.1 HD Master Audio track that is a marked improvement of the Dolby Digital version that was part of the film’s DVD release, it even comes with bonus materials!

With that, it was time to dive into the actual disc, and “astounding” is perhaps the best word to describe the Blu-Ray version that Warner Home Entertainment is presenting here, without much fanfare.

The 1080p high definition transfer is absolutely gorgeous. Rich in color, awash in detail, you would not believe that this is a deep catalog title at all. Virtually without blemishes or defects in the transfer, and devoid of grain, I was looking at an immaculately clean presentation. The transfer is also free of discoloration that often plagues older films that have not been fully restored, and the result is the without a doubt best presentation of “The Great Race” I have ever seen.

The colors are vibrant, bringing to life the larger-than-life characters, as well as the backdrop that spans the world. But it’s not only the outdoor shots that are magnificently rich in color, but also interiors, such as the kitchen cake-fight scene towards the end of the movie, which is absolutely staggering in its richness and vividness as the hues literally seem to leap off the screen.

The image also has beautiful depth, much improved from the already-stellar DVD version. Blacks are deep and solid, creating shadows that are finely delineated and giving the image incredibly visual depth. By the same token, contrast is perfectly balanced, as witnessed oftentimes by the constellation of Professor Fate’s omni-black costumes and gadgets, which is perfectly countered by the Great Leslie’s all-white appearance on the screen.?
As I mentioned before, the release even offers up a DTS 5.1 HD Master Audio track, driving home the message loud and clear—in case the remarkable video presentation hadn’t convinced you yet—that Warner is taking this release seriously, even if it is not going through traditional retail channels. 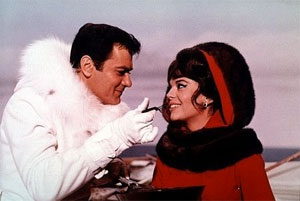 While surround usage is limited on the release, it is important to remember that this film was originally produced in mono and that the surround presentation has been remixed from scratch, using the original sound elements. However, the frequency response has been vastly improved from the original track and has a nice balance with solid basses and clear high ends. As a result of the lossless compression of the DTS track, the presentation is incredibly clear and has a liveliness, with subtle details and nuances, that were lost even in the Dolby Digital 5.1 presentation found on the DVD version.

Not only are the quiet passages nicely filled with subtle details and sound elements, but also the crescendi and more explosive moments have very good headroom to work with. The frequency response has also been dramatically improved and the track has rich basses taking away the harsh sounding edge of the original track. Dialogues are well-integrated, and although still a bit harsh at time, integrate very well with the rest of the mix. It is mostly the lack of noise or hiss, and the lack of distortion and sibilance that make this remastered track such a delight.

Like the DVD version, this Blu-Ray version of “The Great Race” contains a featurette entitled “Behind The Scenes With Blake Edwards’ The Great Race.” Presented as an upconverted high definition presentation, it is a look at the production during the shoot of the film in 1965 and is fascinating in its vintage quality and the rare glimpses it offers.

In addition, the release also contains the movie’s theatrical trailer.

With “The Great Race” Warner Home Entertainment is showing that it is not treating Warner Archive as a cop-out for mediocre product. This is a rock-solid product that surpasses many Blu-Ray Discs found in retail stores. It brings to life the beauty of movies of the era. Unlike today’s striving for hyper-realistic images, the movies of the 50s and 60s tried to create romanticized worlds that are nonetheless believable—if not more so than many of today’s superficial counterparts—for their charm. I am glad I took a look at this release and if you’re a fan of Blake Edwards’ films, or classic comedies in general, “The Great Race” is a Blu-Ray Disc you must own, there can be no question.