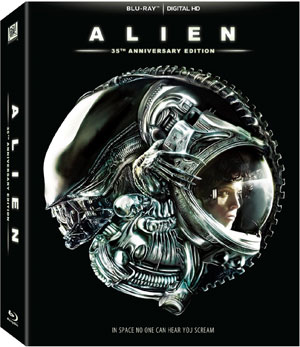 The release kicks off a year-long celebration of the movie franchise, which will also bring you many commemorative and fan-favorite products from licensees such as Dark Horse Comics, SEGA, NECA, Titan Publishing, Sideshow Collectibles, Diamond Select toys, Super7 x Funko and others.

When the crew of the space-tug Nostromo responds to a distress signal from a barren planet, they discover a mysterious life form that breeds within human hosts. The acid-blooded extraterrestrial proves to be the ultimate adversary as crew members battle to stay alive and prevent the deadly creature from reaching Earth. Directed by Ridley Scott and starring Sigourney Weaver in her breakout performance as Ripley, this legendary first film in the “Alien” saga will leave you breathless!

“Alien: 35th Anniversary Edition” will be packed with bonus materials and featues both the Theatrical Version as well as the 2003 Director’s Cut of the film, complete with an Introduction by director Ridley Scott.

The release also contains a selection of Deleted and Extended Scenes, as well as a reprint of the Alien Illustrated Comic and Collectible Art Cards in materialsemory of the late H.R. Giger.

A Digital HD copy of the movie is also included on the release.

Mark you calendars for October 7, because that’s when the shocking events aboard the Nostromo unfold yet again in the “Alien: 35th Anniversary Edition,” which can be yours for only $24.99.