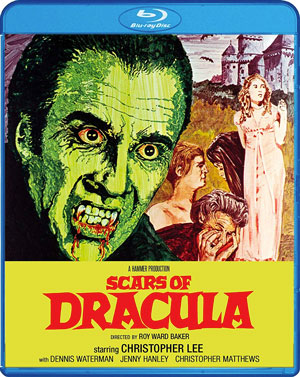 Shout! Factory has just added the Hammer classic Scars of Dracula to its line-up, bringing the 1970 movie starring Christopher Lee to Blu-Ray Disc for the first time in September.

The legendary Christopher Lee is back as Dracula, bringing unspeakable horrors upon a local village that defies his evil reign. But when a young man (Dennis Waterman) and his luscious girlfriend (Jenny Hanley) unwittingly visit the Count’s castle, they find themselves trapped in a face-to-face frenzy of bloodthirsty vixens, religious blasphemy and sadistic henchmen. The prince of darkness has returned like never before, but will his horrific mark remain forever?

The release will offer up the movie in a 1.66:1 open matte transfer, as well as a 1.85:1 version with a DTS-HD Master Audio track in the movie’s original mono presentation. In addition, the disc will also feature a brand new Commentary Track with filmmaker/film historian Constantine Nasr and film historian Randall Larson as they discuss in detail this late entry in Hammer’s Dracula franchise.

A Commentary Track with star Christopher Lee and director Roy Ward Baker, moderated by Hammer Film historian Marcus Hearn is also included on the disc, marking one of the very few occasions on which Lee actually provided commentary to any of the Hammer films.

Also, look for the Featurette Blood Rites: Inside Scars of Dracula, as well as the movie’s Theatrical Trailers and a Still Gallery to round out the release.

Scars of Dracula will make its Blu-Ray Disc debut on September 10 and can be yours for $26.99.