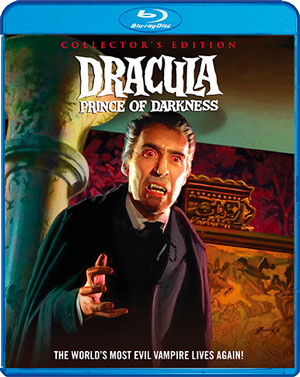 Shout! Factory has added another exciting title to its Scream Factory roster, bringing Terence Fisher’s Hammer classic, Dracula: Prince of Darkness to Blu-Ray in December as a Collector’s Edition.

In Dracula: Prince of Darkness, four English tourists find themselves stranded in the mysterious village of Karlsbad, a sinister and remote place with a deadly, dark legend. Their journey leads them to an abandoned castle where a nightmarish destiny awaits them: an evil in need of resurrection, a blood-craving beast known only as Count Dracula, Prince of Darkness (Christopher Lee).

Released in 1966, this film presents the legendary Lee’s second outing as Dracula, with Hammer Films pushing the cinematic boundaries of graphic gore and terror at the time.

At this time, Shout! Factory has not yet announced specific details about the release, but announcing it as a Collector’s Edition gives us hope that, at long last, this film will finally be released with a few bonus materials to document the production, the impact and the journey of the movie.

Dracula: Prince of Darkness will arrive in stores on December 18 for $34.98. You can also order your copy directly on Shout! Factory’s website at a discount and get a free poster as an additional a bonus.