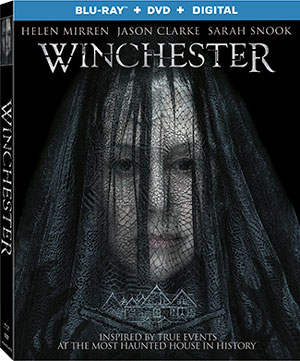 Lionsgate Home Entertainment has added the haunting tale of Winchester to its release line-up, scheduling a Blu-Ray Disc and DVD version of the movie for early May.

Inspired by true events, Winchester is set on an isolated stretch of land outside of San Francisco, where there sits the world’s most haunted house. Seven stories tall with hundreds of rooms, the house has been under construction for decades. But heiress Sarah Winchester (Helen Mirren) is not building for herself, for her niece (Sarah Snook), or for the troubled doctor (Jason Clarke) she has summoned. She is building it as an asylum for hundreds of vengeful ghosts.

Aside from the movie itself, the release will ocntain only a single supplement, the Featurette “Driven by the Spirits: The Making of Winchester” with cast and crew interviews and behind-the-scene footage.