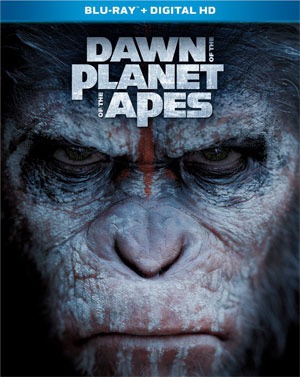 Twentieth Century Fox Home Entertainment takes you to the center of the battle between apes and humans in Dawn of the Planet of the Apes, scheduled for release in December.

It is 2026, and humanity has been pushed to near extinction by a deadly virus. When a group of survivors desperate to find a new source of power travel into the woods near San Francisco, they discover a highly evolved community of intelligent apes led by Caesar (Andy Serkis).  The two species form a fragile peace but dissention grows and the groups find themselves hurtling toward all-out war.  Fans and critics flocked to the film, with The Hollywood Reporter raving that “In the annals of sequels, Dawn is to Rise of the Planet of the Apes what The Empire Strikes Back was to Star Wars—it’s that much better.“

The DVD version of the movie will also contain the Featurette ”Andy Serkis: Rediscovering Caesar”, showing how the actor went back to play the leader of the apes. The disc will also come with 4 Galleries.

The Blu-Ray 3D and Blu-Ray versions will feature a 1080p high definition transfer of the film with DTS 7.1 HD Master Audio. As bonus, the release will also contain an Audio Commentary by director Matt Reeves and Deleted Scenes with Optional Commentary by the director.

A series of Featurettes will also be found on the release, such as ”Journey to Dawn,” “Andy Serkis: Rediscovering Caesar,” “Humans and Apes: The Cast of Dawn,” “The World of Dawn,” “The Ape Community,” “Move Like an Ape: An Artists Artist’s Medium,” “Weta and Dawn”,/i> and ”The Fight for a New Dawn”.

4 Galleries will also be included on the disc.