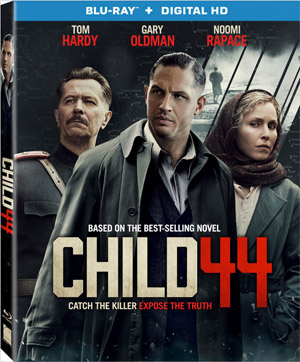 Lionsgate Home Entertainment has just added the politically charged thriller Child 44 to its line-up, scheduling the post-war period film for release on Blu-Ray Disc and DVD in early August.

After a friend’s son is found dead, Soviet secret-police officer Leo Demidov (Tom Hardy) suspects his superiors are covering up the truth.  When Leo dares to raise questions, he is demoted and exiled to a provincial outpost with his wife (Noomi Rapace).  There, Leo soon discovers other mysterious deaths with similar circumstances and convinces his new boss (Gary Oldman) that a deranged serial killer is on the loose-and must be stopped before he strikes again in this electrifying thriller.

As a bonus feature, the release will also contain the Featurette ”Reflections of History,” that takes a look behind-the-scenes at the film crew’s work recreating the 1950s Soviet Union.