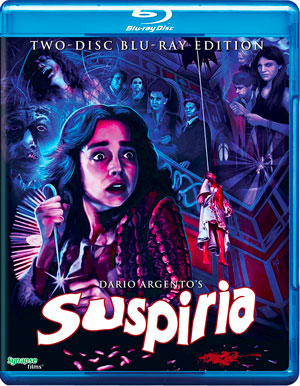 Synapse Films has just revelaed detailed information about the upcoming release of Dario Argento’s masterpiece, Suspiria on Blu-Ray Disc and DVD, scheduling the film for March.

Arriving in a brand new 4K restoration, Suspiria tells the horrific tale of a young student who uncovers dark and horrific secrets within the walls of a famous German dance academy.

Painstakingly restored over the past three years, Synapse Films has created the ultimate special edition of this horror classic with the supervision and approval of the film’s Director of Photography, Luciano Tovoli. The restoration for this release was taken from the original uncut, uncensored 35mm Italian camera negative and the release will, for the first time ever, feature the original 4.0 English surround sound mix.

The release also includes ”Do You Know Anything About Witches?”, a 30 minute Suspiria visual essay written, edited and narrated by Michael Mackenzie.

Also look for ”Suzy in Nazi Germany”, a Faturette visiting the German locations from the film, as well as an all-new Anniversary Retrospective on the making of the film and its influence on cinema called ”A Sigh from the Depths: 40 Years of Suspiria”.

An Interview with star Barbara Magnolfi will also be included, along with Alternate All-English Opening and Closing Credits Sequences, playable via seamless branching directly in the movie. Additionally, the “International Classics” English “Breathing Letters” Opening Credit Sequence from U.S. release will also be included on the disc.

The original theatrical trailers, TV spots and radio spots are also part of the release, along with Reversible Cover Art created by Joel Robinson.