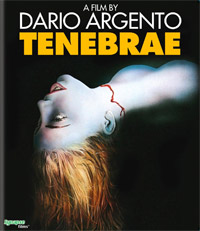 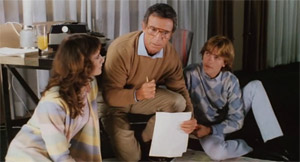 After venturing into the realms of horror, in the early 1980s, Italian director Dario Argento returned to his roots and the giallo genre with his film “Tenebrae.” Available now in high definition for the first time as a Blu-Ray Disc from Synapse Films, I decided to give the release a check-up.

“Tenebrae” is a violent murder-mystery (or giallo, as the genre is known in Italy) which focuses on fiction writer Peter Neal (Anthony Franciosa). Neal is visiting Rome in support of his latest novel, “Tenebrae,” which has been sitting atop the bestselling charts for many weeks. Shortly after the writer arrives in Rome, a series of violent murders springs up, which are connected in different ways to his book. Someone seems to use his novel as a template for the gruesome killings.

The police are baffled but quick to point fingers at Neal, so to extricate himself, Neal, with help from his assistant Anne (Daria Nicolodi) and his agent (John Saxon), begins his own investigation and slowly manages to unravel the case. 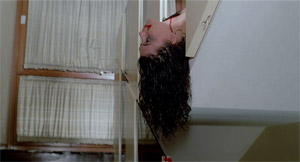 The plot contains many twists and turns and is quite effective as both a thriller and a mystery despite the numerous flaws and holes in the script. Every time you’re sure you know who the killer is, that character gets killed, and you have to start guessing all over again.

As I mentioned before, “Tenebrae” was following Argento’s foray into nightmarish horror with his two previous films, the well-known “Suspiria” and it’s pseudo-sequel “Inferno.” Unlike those films, “Tenebrae” relies very heavily on the cohesiveness of its plot, and while it’s by far not perfect, it is probably one of the most plot-driven of Argento’s films, with each individual scene building upon the previous one. At the same time, however, Argento never abandons his visual style. Whether he uses a voyeuristic camera or incredible crane shots to draw viewers in, he always finds an interesting angle to frame his action, setting the film good notch above traditional Italian schlock fare. 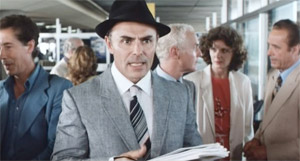 To a degree, the style of the “Tenebrae” can be compared to “Suspiria”. While “Suspiria” is famous for its use of colored lights, a cinematographic style influenced mostly by Asian filmmakers, “Tenebrae” is shot using very natural and bright light settings. While there are several colorful objects in the film, many of the props, sets, and costumes are plain white. Argento and his cinematograper Luciano Tovoli employed this style purposely in order to contrast the red of the blood during the murders more effectively. This stylistic element is coming through nicely here, in this clean transfer.

Viewers also get to appreciate the infamous Louma crane shot with the camera mounting and exploring an apartment building in its entirety, although I have always felt that especially this effect shot is just that and actually slows down the film’s pacing, breaking the suspense of disbelief. 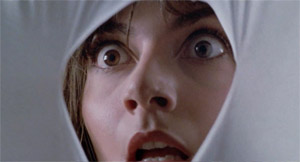 “Tenebrae” has been released before a number of times on DVD, but this is the film’s first appearance as a high definition version and, naturally, I was eager to find out how it compares. The transfer itself is perfectly clean, without noticeable defects or blemishes. The transfer’s palette faithfully reproduces the original muted, pastel-like colors of the movie’s production, as well as the more vivid hues of Argento’s cinematography. It is notable that the color correction has been handled meticulously and colors never fluctuate. Despite this being a brand new transfer taken from the original camera negative, unfortunately, the level of detail exhibited in the transfer is a bit underwhelming. Clearly, this is a result of the source material, and, perhaps, this is the best the film will ever look. The transfer exhibits a visible bit of grain, which is good news for fans of the film because it maintains the movie’s edgy look and never gives it the kind of scrubbed appearance many remasters exhibit these days. “Tenebrae” was shot on film, and this Blu-Ray looks like a film presentation. Though generally better looking than its DVD counterparts, for most casual viewers, the improvement in image detail is probably not large enough to warrant an upgrade. Yes, you will get better colors and yes, the image reads a bit better with more detail, but overall, the impression is not one of instant awe. 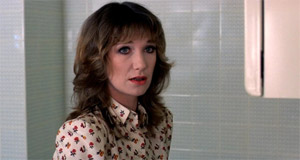 The release features a 2.0 DTS-HD Master Audio track that reproduces the film’s original mono audio presentation. It is adequate, but the 5.1 channel remix that was part of previous DVD releases, will most definitely be remembered fondly.

This is the uncut version of the film, running 101 minutes, not the edit version that ran in US theaters, although Synapse has clearly pieced the presentation together from various elements. The opening title, for example, is spelled “Tenebre,” which appears to be from one of the US versions of the movie (which strangely featured Italian credits for authenticity’s sake). Also, the film features the US end credit sequence, while the rest of the movie seems to be the original Italian cut.

The release contains a commentary track by film critic and Argento scholar, Maitland McDonagh. Strange as it may seem, I do prefer this track over the somewhat awkward commentary track on Anchor Bay’s releases that features Dario Argento, composer Claudio Simonetti, and journalist Loris Curci, for the simple reason that it is much more informative. McDonagh spends a lot of time exploring Argento’s style, his work, his background, his influences and many other aspects that the previous track never covered. 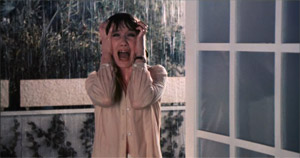 An alternate opening title sequence of the film is also included, as well as the feature-length documentary “Yellow Fever: The Rise and Fall of the Giallo.” The documentary takes a look at the genre as a whole, chronicling it from its beginnings as early 20th century crime fiction, to its later influences on the modern slasher film genre. It is an interesting supplement that definitely adds color to the release.

For fans of the film and Argento admirers in general, buying this Blu-Ray version should be a no-brainer. For those of you who aren’t familiar with the film, I urge you to check it out. Although visibly dated and bugged with a number of flaws in the script, you will get to see a thriller made by an iconic director at the peak of his craft.