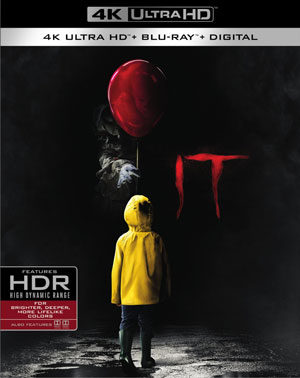 Warner Brothers Home Entertainment has just unveiled details about the upcoming release of this summer’s horror blockbuster IT, bringing the creepy terror to 4K UHD, Blu-Ray Disc and DVD in January.

When children begin to disappear in the town of Derry, Maine, a group of young kids are faced with their biggest fears when they square off against an evil clown named Pennywise, whose history of murder and violence dates back for centuries.

Based on Stephen King’s terrifying horror thriller, the release will also include a number of bonus features, such as the Featurette ”Pennywise Lives!” in which you can discover how Bill Skarsgård prepared to portray the primordial creature known as Pennywise the Dancing Clown.

Also included are the Featurettes ”The Losers’ Club” allowing you to get up close and personal with the teenage stars of IT as they bond together during the production, as well as ”Author of Fear”, in which Stephen King reveals the roots of his best-selling novel, the nature of childhood fear and how he created his most famous monster, Pennywise

Eleven Deleted or Extended Scenes are also included on the release.